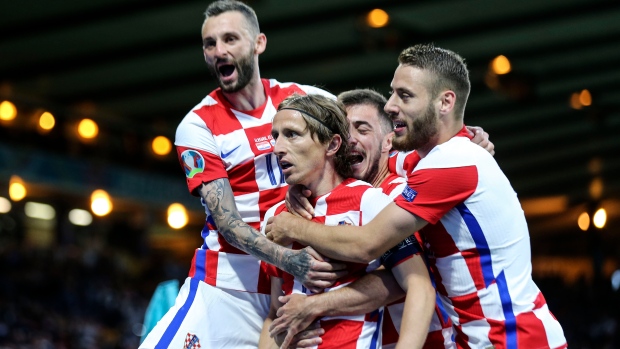 There was no joy for Scotland in Glasgow on Tuesday.

Second-half goals from Luka Modric and Ivan Perisic gave Croatia a 3-1 victory at Hampden Park, securing the World Cup runner-ups' spot in the Round of 16 and eliminating the hosts from Euro 2020.

It was the Tartan Army that started the match with attacking intent. Aston Villa's John McGinn sent a beautiful floating cross to the far post for Che Adams in the sixth minute. If the Southampton striker chose to dive at it with a header, he would have likely scored, but instead attempted to meet it with a high boot and missed the chance.

Croatia got on the board in the 16th. Perisic beat everybody to a deep cross into the Scotland area, heading down for Nikola Vlasic, whose low shot beat David Marshall for a 1-0 lead.

Scotland evened matters just before the half with their first goal of the tournament and Callum McGregor's first international goal. After a spell of attack from Scotland, a poor clearance from Croatia fell to McGregor and the Celtic man sent a beautiful low drive past Dominik Livakovic to tie the game at 1-1.

But it was Croatia's two biggest stars who would put the match to bed in the second half.

As Croatia marauded down the left, the ball was sent back to the middle of the pitch where Modric hit a wonder strike. The Real Madrid man and the 2018 Ballon d'Or winner hammered the ball from just over 20 yards out leaving Marshall with no chance on a world-class shot to make it 2-1 in the 62nd.

Perisic got Croatia some insurance in the 77th and added a precious goal to its differential.

Off of Modric's corner, Perisic beat Arsenal defender Kieran Tierney to the ball and his glancing header hit the far post and went in to make Croatia's lead unassailable at 3-1.

With England's 1-0 win over the Czech Republic, Croatia finishes second in Group E via goal difference and will travel to Copenhagen to play on Tuesday.