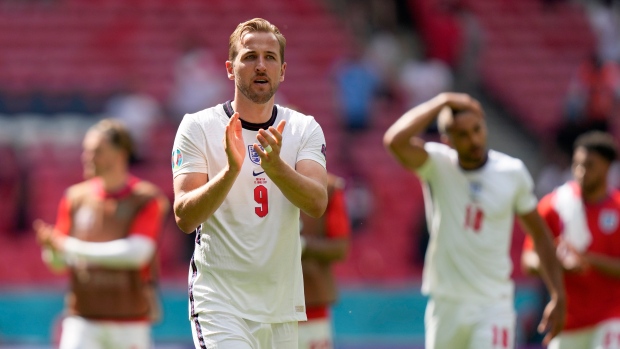 It’s a mouthwatering fixture at Wembley that fans in the UK have had circled since the Euro 2020 groups were drawn when England welcomes Scotland in a Home Nations clash on Friday as part of a rivalry that has existed for nearly 150 years.

Coverage of England and Scotland begins Friday afternoon at 2:45pm ET/11:45am ET on TSN 1/3 and streaming on TSN.ca, the TSN App and TSN Direct.

While England and Scotland have met on the pitch 113 times before, Friday’s game is only the second time that the two teams have faced off in an international tournament before. The only previous match came at Euro 1996 in the group stage, which coincidentally was also played at Wembley Stadium. On that date, Alan Shearer and Paul “Gazza” Gascoigne found the back of the net and David Seaman stopped a Gary McAllister penalty as the Three Lions were 2-0 victors.

There are no secrets between these two teams with 14 of Scotland’s 26 squad members playing their club football in England, meaning that club teammates will be international foes on Friday. Manchester United and Scotland midfielder Scott McTominay says it’s going to be strange facing off against Red Devils teammate Marcus Rashford.

"Playing against him [Friday] will be exciting,” McTominay said. “I can't wait for it. It will be a strange moment obviously, having played together for so many years since the age of eight going through the academy at Manchester United, and to be playing against each other tomorrow will be fun."

Scotland manager Steve Clarke says his team is well aware of the importance of this fixture.

"It's a game with a lot of historical significance,” Clarke said. “It's a game the players all want to play in. What we have to do is to make sure we prepare properly for it. It will be easy to get the players up for the game. We know we need a result and that's what we aim to do."

One of the biggest tasks for the Tartan Army will be trying to keep up with England’s blistering pace.

"We will try and start just as quick as England,” Clarke said. “We will try and get on to the front foot as early as possible; try and get a hold of the ball. The players will try and make themselves feel comfortable on the pitch and if we can get off to a quick start it will be good for us."

In personnel news, Arsenal defender Kieran Tierney (knee) could be available for selection for Scotland, giving a huge boost to the backline.

"He's someone we rely on a lot,” McTominay said of Tierney. “We need him. He's a big personality and a great character within the group. The boys respect him a lot. You can see that in training and the way he's been playing for Arsenal this year. I'm sure everyone's excited to see him back."

England captain Harry Kane was complimentary of Scotland’s camaraderie heading into the match.

"It will be a tough game,” the Tottenham Hotspur talisman said. “I think their teamwork is their greatest strength. They've got a great togetherness. I thought they were unlucky against the Czech Republic the other day. They played quite well. It just didn't quite go their way so we're ready for a tough game against a very good side with great experience as well."

With the return of Harry Maguire on the horizon, back from an ankle injury that ended the Manchester United captain’s season prematurely in May, Aston Villa defender Tyrone Mings, who started in central defence in the win over Croatia, welcomes the competition from Maguire.

"He’s somebody that I look up to and somebody that is so consistent with a lot of pressure on his shoulders being captain of Man United and being one of the main players for England,” Mings said. “He's a person that I take a lot of inspiration from so to be mentioned in the same breath as him is a compliment in itself."

A win for England on Friday will secure passage to the knockout round for the third straight Euro.