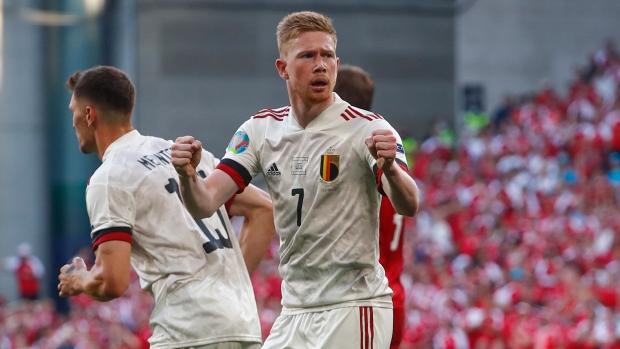 Finland isn’t supposed to be here. Finland, in their first ever Euro, shouldn’t have the opportunity to advance to the knockout stage on Matchday 3. But that’s just what the team with the longest pre-tournament odds has the chance to do when they meet Belgium on Monday in St. Petersburg.

Coverage of Finland vs. Belgium begins at 3pm ET/12pm PT across the TSN Network and streaming on TSN.ca, the TSN App and TSN Direct.

“Belgium will be a very strong opponent, but the team has shown that we can make dreams come true," manager Markku Kanerva said.

Not only can Finland move on to the Round of 16, they can still win the group with a victory. They will also advance to the knockout round if they draw with Belgium and Russia falls to Denmark in the other Group B encounter. But right now, Kanerva is focused on keeping their fate in their own hands and remains confident in his team’s ability even coming off of a 1-0 loss to Russia last time out.

“We defended well and going forward we improved on our display against Denmark,” Kanerva said of the loss. “We didn’t manage to score but we had good situations: some shots that went narrowly wide, others were blocked. It was a really close game.”

The stakes aren’t nearly as high on Monday for Roberto Martinez’s Red Devils. With two wins from two matches, Belgium has already secured passage into the knockouts and will be heavily favoured to make it three wins from three when they meet Finland. But the job isn’t done yet. Belgium still needs at least a point from Finland to wrap up top spot in the group.

One player Martinez will be turning to for help in getting that done is Eden Hazard. The Real Madrid midfielder will make his first start of the tournament against Finland. After what was mostly an indifferent season at the Bernabeu and with rumours that Hazard could be on his way out of the club, Martinez is happy with what he’s gotten thus far from the former Chelsea man.

“Eden is Eden now,” Martinez said. “What was unusual was to see him the way we did before. He’s tried so hard to be fit and to be the player that can make a difference at club level. That has probably put him in a mindset where [he] hasn’t enjoyed his football and his body never reacted well. I see him free and that is what he should be — it shouldn’t be the other way around.”

History is not on Belgium’s side. The Red Devils haven’t beaten Finland since 1968 and are winless in their last seven against the Finns. The last time these two teams met was a 2016 friendly in Brussels. After Kasper Hamalainen gave Finland the lead in the 53rd, Romelu Lukaku spared the hosts’ blushes with an 89th-minute equalizer in a 1-1 draw.