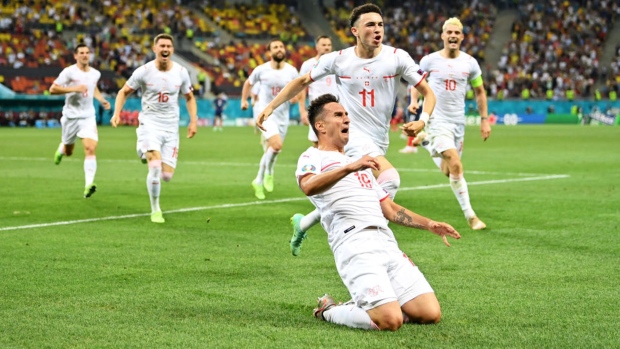 For the first time at Euro 2020, it came down to penalties in Bucharest as Switzerland beat France 3-3 (5-4 on penalties) to advance to a quarterfinal date with Spain on Friday in St. Petersburg.

It was Switzerland that was on the front foot for the first half, taking advantage of a listless France side that switched to a back three for the match. The change seemed to unsettle Pogba and N'Golo Kante, who were largely ineffective for the first 45 minutes.

The Swiss deservedly opened the scoring in the 15th. Breaking down the left side, Steven Zuber lofted a picture perfect cross into the middle of the area for Haris Seferovic. The Benfica men leapt over Clement Lenglet to head home for his second goal of the tournament.

France slumped into the half with Antoine Griezmann not taking a single touch in the Swiss area.

Didier Deschamp made one change for the restart, bringing on Kingsley Coman in place of Lenglet and dropping Adrien Rabiot into a defacto left-back role.

While Les Bleus looked livelier to open the second 45, the Swiss had the opportunity to perhaps ice the match in the 55th. Referee Fernando Andres Rapallini missed Benjamin Pavard taking Zuber down in the France area, but VAR did not. After a check from Rapallini, the penalty was given and Rodriguez stepped to the spot. After having missed a penalty in a friendly against the United States just before the tournament, Rodriguez was stopped again with Lloris making a fine diving stop.

Their goalkeeper's heroics inspired Les Bleus with Benzema taking centre stage. In the 57th, Griezmann through ball was behind Benzema, but the Real Madrid man's audacious backheel somehow brought the ball forward, allowing him to slot home over Yann Sommer to tie the match.

Then, only two minutes later, Mbappe, Benzema and Griezmann played a give-and-go for a second. An Mbappe backheel found Griezmann, who lofted a cross back to Benzema for a header and a 2-1 win.

When a booming Pogba wonder goal from distance made it 3-1 in the 75th, the match appeared to be done and dusted, but it was not.

A beautiful pass from substitute Kevin Mbabu allowed Seferovic to head in his second of the game to pull the Swiss back within one in the 80th minute.

Then, with only seconds remaining in regular time, Granit Xhaka's fine pass found Mario Gavranovic, who put Presnel Kimpembe on skates, before hammering a fine finish in the bottom left corner to force extra time.

Thirty minutes of extra time solved nothing with penalties needed to settle the contest.

The victory was Switzerland's first ever in a knockout-round match at a Euro.