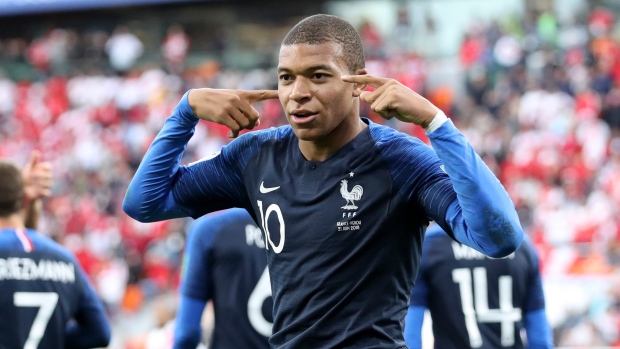 It’s only fitting that the final opening match of Euro 2020 is its most colossal.

You can watch the defending World Cup champions in France take on Germany in a Group of Death heavyweight tilt Tuesday afternoon at 2:45pm ET/11:45am PT on TSN 1/3/4 and streaming on TSN.ca, the TSN App and TSN Direct.

Two of the most dominant forces in European football meet at Allianz Arena in Munich on Tuesday when the last two World Cup winners take the pitch as France takes on Germany in a game filled with some of the biggest names in the sport. In what is an unfavourable draw for the teams, but a dream for fans, these two nations will also have to get through Portugal (and Hungary) for Group D supremacy in what is one of the deepest groups in the 50-plus years of Euro history.

For Die Mannschaft, the Euro is something of a last hurrah. Longtime manager Jogi Low will step down following the tournament after seven major tourneys and 15 years on the job, to be replaced by former Bayern Munich gaffer Hansi Flick. What kind of swan song Low will have remains to be seen.

It’s not unfair to suggest that of the three heavyweights in Group F, Germany is at the bottom. Though they thrashed Latvia 7-1 in their final tune-up prior to the Euro, there have been a couple of disconcerting results from Die Mannschaft in recent months that lay bare some potential struggles that could be in the offing for the tournament.

In a Nations League match last November, Germany was embarrassed 6-0 in Sevilla against a rampaging Spain team. Then, this past March, North Macedonia sprung the biggest shock of World Cup qualifying in a 2-1 victory over Germany. Both defensively and offensively, there are question marks about this Germany team and if there is a club capable of asking those questions, it’s Les Bleus.

"France have the most adaptable team in the world,” Low said. “We know how they play, yet they are nearly impossible to predict. We have a good dynamic in our team, the atmosphere is very good. If we deploy our strengths properly, we can go into this match with confidence."

France manager Didier Deschamps has an almost laughable array of talent at his disposal. It wouldn’t be hyperbolic to say that the French could have entered two teams into the Euro. To wit, the likes of Houssem Aouar, Dayot Upamecano and Tanguy Ndombele couldn’t find spots on this team and are watching Euro 2020 from home.

But as difficult as it was for Deschamps to select a team, he says that his gameplan for taking on Germany is a simple one.

"It's a massive game to start with,” Deschamps said of the encounter with Die Mannschaft. “It's a massive game for us but also for the Germans as we are both among the top European nations. The objective is to be effective in both boxes as that's where the game will be decided."

Since losing 1-0 to Germany in the quarterfinals of World Cup 2014 on a goal from Mats Hummels, Les Bleus are undefeated in their last five contests against the Germans. Most recently, France was a 2-1 winner over Die Mannschaft in UEFA Nations League action in 2018 thanks to an Antoine Griezmann brace.

Tuesday’s match will also mark a second straight Euro with a match between these two teams. Finalists in 2016, Les Bleus sent Germany packing from the last Euro in the semifinals with a 2-0 win on a different Griezmann brace.