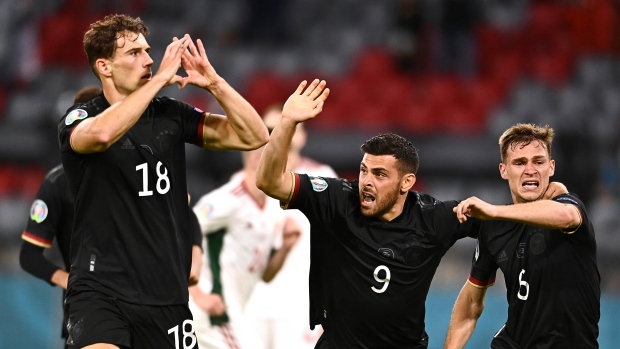 Germany came from behind to prevent an upset that would have ended their Euro 2020 campaign and Jogi Low's time as manager.

Die Mannschaft played to a 2-2 draw with a scrappy Hungary team that almost emerged from the Group of Death. With the draw, Hungary's tournament ends at the group stage.

Hungary took a shock lead in the 11th on an absolutely world-class goal from Adam Szalai.

Hitting Germany back on the counter, Roland Sallai marauded down the right side before swinging a sublime cross into the area that was met by a diving Szalai's head for a 1-0 lead on one of the goals of the tournament, thus far.

Die Mannschaft thought normal order was restored in the 66th thanks to a goalkeeping error from Peter Gulacsi. The RB Leipzig badly missed an attempted clearance that allowed Mats Hummels to head over to Kai Havertz for the Chelsea man to find the equalizer.

But Germany's joy was short-lived. Straight from the kick-off a long ball at the Germany goal was met by Andras Schafer before Manuel Neuer could get there, beating the German 'keeper and restoring Hungary's lead at 2-1.

The Cinderella story wouldn't have a happy ending, though. Bayern Munich's Leon Goretzka, whose involvement in the tournament thus far has been limited due to injury, played the hero for Die Mannschaft in the 84th. Timo Werner's initial shot was blocked, but it fell to Goretzka to hammer home and even matters at 2-2 and spare Germany's blushes.

The point was enough for Die Mannschaft to finish second in Group F. Their Round of 16 opponent is old foe England, who they will meet on Tuesday at Wembley Stadium.