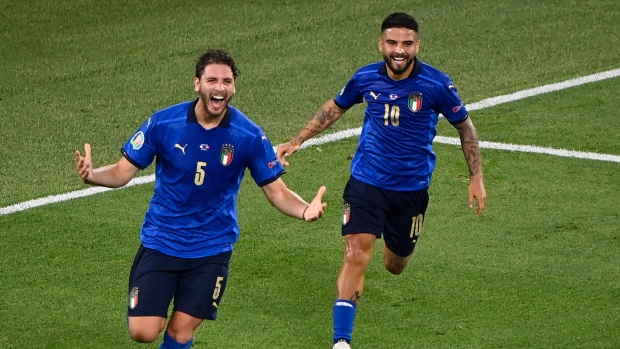 Italy became the first team to reach the knockout round of Euro 2020 with a comfortable 3-0 win over Switzerland at the Stadio Olimpico in Rome.

Sassuolo midfielder Manuel Locatelli was the star man, scoring two goals for the Azzurri, who made it two wins from two matches to vault atop of Group A.

Italy thought they opened the scoring in the 18th through captain Giorgio Chiellini. The veteran defender headed home from a corner on what would have been his first international marker since 2016, but the goal was ruled off for a foul with the Juventus man adjudged to have pushed off with his arm on the Swiss defender, making contact with the ball for a handball. Worryingly, though, Chiellini limped off only minutes later with an apparent leg injury.

Only a few minutes later, the Azzurri would get their goal and it was Domenico Berardi, the architect of Italy's first goal against Turkey last Friday, who would play a key role. Berardi collected a fine wide ball from Sassuolo teammate Locatelli and ran past his marker, before sending a cross into the area for Locatelli to latch on to and beat Yann Sommer for the 1-0 lead.

Locatelli completed his brace in the 52nd. Receiving the ball just outside the area, Locatelli expertly sent a low shot into the bottom corner, freezing Sommer, by using two defenders as a screen. Locatelli was substituted in the 86th, leaving the pitch to a standing ovation.

Lazio striker Ciro Immobile wrapped up the three points in the 89th, spinning to deliver a speculative low drive past a diving Sommer, for his second goal of the tournament.

After having never scored three goals in a Euro match before, the Azzurri have now done it twice in five days.

Italy now plays undefeated Wales in its final match of the group stage for top spot in the group, while the Swiss must beat Turkey to hope to progress to the knockout round.