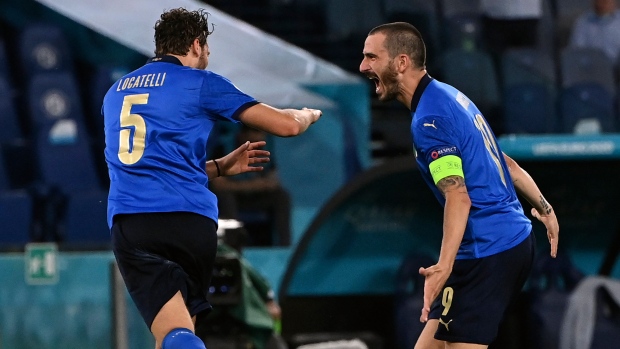 Italy has already booked their place in the Round of 16 at EURO 2020, but if they want to advance as Group A winners, they will need at least a point against Wales on Sunday as the teams wrap up round robin play.

Coverage of Italy and Wales begins Sunday at 11am ET/8am ET on TSN3 and streaming on TSN.ca, the TSN App and TSN Direct.

If Wales can earn the victory in front of a partisan crowd at Stadio Olimpico in Rome, they will advance at the top of the group.

For the Italian side it has been a dream start to the tournament.  They have cruised to a pair of 3-0 victories in their opening matches, stretching their overall streak of not conceding a goal to 10 straight games.

Ciro Immobile has been one of the biggest offensive threats of Italy, finding the net in the victories over Turkey and Switzerland.

Manuel Locatelli was the star of their second win, scoring twice against Switzerland in the game that confirmed their place in the knockout round of the tournament.

Italian forward Domenico Berardi, who helped create Locatelli’s first goal against the Swiss, is impressed with how his team has looked offensively.

“We have so many options in attack,” said Berardi.  “We must try to give 100% in every game. There's another important test coming up [against Wales] and we will aim to win that too.”

While a win against Italy will give Wales the Group A title, a single point would secure second place and guarantee their advancement into the next round.

Despite missing a penalty in their second game, Gareth Bale pulled the strings for Wales to help them earn three points against Turkey.

The Welsh captain assisted on Aaron Ramsey’s opening goal just before halftime and on Connor Roberts stoppage time marker that secured the victory.

The performance built on their opening draw, a game where Kieffer Moore scored in the second half to earn a single point against Switzerland.

While four points could already be enough to have them in the last 16, head coach Robert Page will be playing to win on Sunday.

"We can't plan for [qualification], if four points is good enough to get through then brilliant,” said Page.  “We'll pick a team and formation to go out against Italy and compete, and get the win. We want to win every game we play, and it's no different on Sunday."

This will be the 10th fixture between the two teams with Italy holding a 7-2-0 advantage in those meetings.

The last time the countries met was during the EURO 2004 qualifying competition, a 4-0 victory for Italy in Milan.