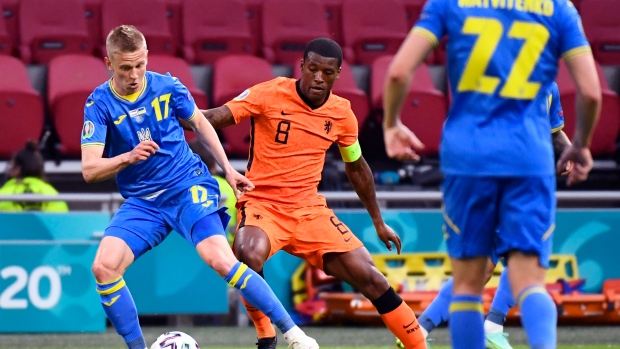 Austria, winners on Matchday 1 against North Macedonia, travel to Johan Cruyff Arena in Amsterdam to take on the Netherlands, who were victors over Ukraine on Sunday, but will be shorthanded for the encounter.

Coverage of Austria and Netherlands begins at 2pm ET/11am PT on TSN 1/3 and streaming on TSN.ca, the TSN App and TSN Direct.

UEFA announced a one-match ban for Austria striker Marko Arnautovic on Wednesday, ruling him out of suiting up against the Dutch. The suspension comes for an incendiary celebration after scoring Austria’s third goal last Sunday. Arnautovic, who is of Serbian descent, yelled something towards a pair of North Macedonia players of Albanian heritage and had to be restrained by captain David Alaba.

Manager Franco Foda says that while Arnautovic’s absence won’t go unnoticed, he has a number of other attacking options at his disposal, naming Christoph Baumgartner and Sasa Kalajdzic as potential starters up front.

"We’ll definitely miss Marko, but we’ll need to compensate that and rally together even more as a team,” Foda said. “He was an option to start tomorrow; now we will have to think about another plan but, despite everything, we will send a strong team onto the pitch."

For Alaba, the Dutch represent a step up in competition level for his team.

“We know that it won’t be easier than the last match, but we want to stick to our own game on the pitch and give everything to be get a positive result,” the incoming Real Madrid defender said. “They are full of quality and have great individual players that play at a world-class level. They also have a lot of quality as a team. We have done a lot of analysis, but we want to build on our own strengths."

On the Dutch side, forward and impending free agent Memphis Depay hopes to get a little more involved offensively than he was against Ukraine.

“Knowing the other guys can also find the net is a good feeling,” Depay, whose Lyon contract is set to expire at the end of the month, said. “We could even have scored more. I didn't have much space during the game, which means that others did, somewhere else on the pitch or in front of goal.”

Defender Stefan de Vrij says that his team was pleased with the three points from their opener, but must do better against Austria to avoid blowing a two-goal lead like they did against Ukraine.

“We knew how important it was to start with a victory, so we’re really happy that we managed that,” the Inter man said. “But, on the other hand, we did give away two goals, so as a defender I see that as a blot on the performance.”

Manager Frank de Boer says that he has a completely healthy roster to choose from for Thursday’s match.

Over history, the Oranje and Austria have been fairly evenly matched with the Netherlands holding a slight edge and a 8-4-6 record. Thursday’s encounter will be the first match between the teams since a 2016 friendly. That June, the Oranje claimed a 2-0 victory in a friendly in Vienna with Vincent Janssen and Georginio Wijnaldum as the goal scorers.