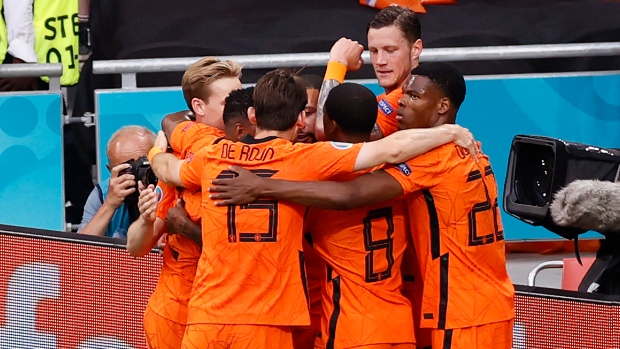 The Netherlands got the job done against Austria in Group B action from Amsterdam, winning 2-0 to make it two wins in two matches and advance to the knockout round of Euro 2020. It's the Dutch's first trip to the Round of 16 at the Euro since 2008.

Memphis Depay scored from the penalty spot early in the first half before Denzel Dumfries, with his second goal of the tournament, wrapped up the three points midway through the second half.

It took the intervention of VAR for Depay to be able to step up to the spot. In the ninth minute, Dumfries was taken down in the area by David Alaba with nothing given. Upon a VAR check, the tackle was adjudged to have been a foul with a penalty awarded. Depay, set to depart Lyon at the end of the month on a free transfer, shot to the right to beat goalkeeper Daniel Bachmann and open the scoring in the 11th.

The match remained 1-0 going into the half, but the scoreline could have been tilted much more in the Dutch's favour if they had buried a number of late chances that were sent over the bar or into the side netting.

It was Depay who started to move to get the Oranje their second goal. Sending a ball over the top, Donyell Malen beat the onside trap and got clear in on goal. Rather than taking his chances, the 22-year-old PSV man instead coolly slotted over to Dumfries whose shot just escaped a diving Bachmann to make it 2-0 in the 67th minute.

Austria, pedestrian for much of the 90 minutes, still sit on three points from their Matchday 1 victory over North Macedonia. They finish their group-stage schedule on Monday with a match against Ukraine, who were 2-1 winners over North Macedonia earlier on Thursday, in Bucharest, knowing that at least one point is necessary to move on to the knockout round.

The Oranje, already group winners, also wrap up their Group B action on Monday, once again in Amsterdam, against North Macedonia.