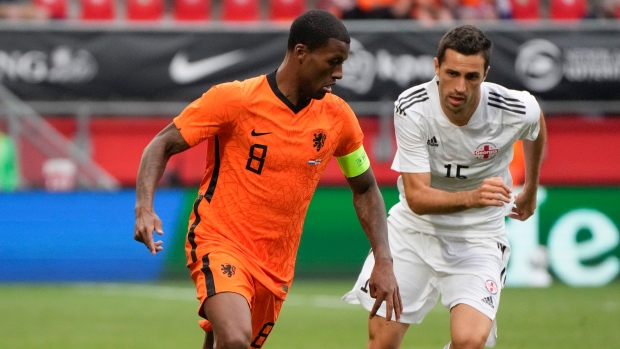 Netherlands captain Georginio Wijnaldum says his team isn't afraid to walk off the pitch if they receive any abuse from spectators during their Round of 16 against the Czech Republic on Sunday in Budapest.

"UEFA should be there to protect the players and make the decision," the Paris Saint-Germain midfielder said. "It should not be left to the players. Players often get punished for protecting themselves so UEFA needs to take a lead role in this. I have said I don’t really know how I will react in such a situation. I thought first that I would walk off the pitch but maybe not now because maybe the opponent will think: ‘Let them [in the crowd] throw racist slurs and they will walk off the pitch.' It could be the case that I will walk off the pitch, but I will speak with the players about it first."

The 30-year-old Wijnaldum intends to wear a rainbow captain's armband emblazoned with "One Love" as a measure of solidarity with the LGBTQ community during Pride Month.

"It is not just against Hungary," the Premier League and Champions League winner with Liverpool said. "The armband means a lot because we stand for diversity – one love means everybody is a part of it and everybody should be free to be who they are. In our opinion, [the right to be yourself] has been encroached upon. As players we have a podium to do whatever we can to help."

Germany captain and Bayern Munich goalkeeper Manuel Neuer wore won earlier in the tournament and was briefly under UEFA investigation for it, but it was dropped with European football's governing body "calling it a team symbol for diversity."

Still, UEFA wouldn't allow Munich's Allianz Arena to be lit up in rainbow colours for Wednesday's Germany match against Hungary. Hungary's parliament recently passed a law under the guise of combating pedophilia that prohibits sharing any content portraying homosexuality or gender identity in sexual education for children under 18. The law has been widely criticized by other members of the European Union with 17 EU leaders writing a letter on Thursday condemning the bill and vowing to take legal steps against it.

Also on Thursday, UEFA announced an investigation into alleged racial and homophobic abuse against Portugal's Cristiano Ronaldo and Kylian Mbappe of France during Wedensday's 2-2 draw in Budapset.