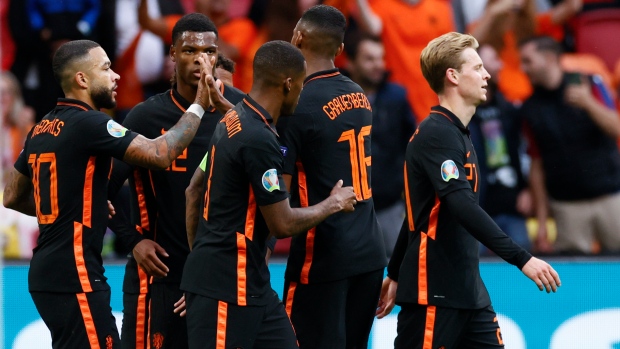 Already Group B winners, the Netherlands made it three wins from three matches in a comfortable 3-0 victory over an already eliminated North Macedonia in Amsterdam.

The Oranje opened the scoring midway through the first half on the counter. With North Macedonia moving forward, a quick dispossession and a fine pass by Donyell Malen allowed Memphis Depay to celebrate his new contract with Barcelona by scoring his second goal of the tournament in the 24th minute.

Memphis then played distributor after the restart. After drawing a number of North Macedonia defenders towards him, Depay teed up Wijnaldum for his first goal of the match in the 51st.

Wijnaldum would add his second only seven minutes later. After smart work from Malen, Depay hammered an effort at net that was dealt with nicely by North Macedonia 'keeper Stole Dimitrievski, but the rebound fell to the former Liverpool man to tap in and make it 3-0.

The most emotional moment for North Macedonia came in the 70th when 38-year-old Goran Pandev, in his final international appearance, was substituted. North Macedonia's record goal scorer came off the pitch in a guard of honour and a standing ovation from the fans at the Johan Cruyff.

The Oranje will now head to Budapest for their Round of 16 match on Sunday when they will take on one of the third-place finishers.