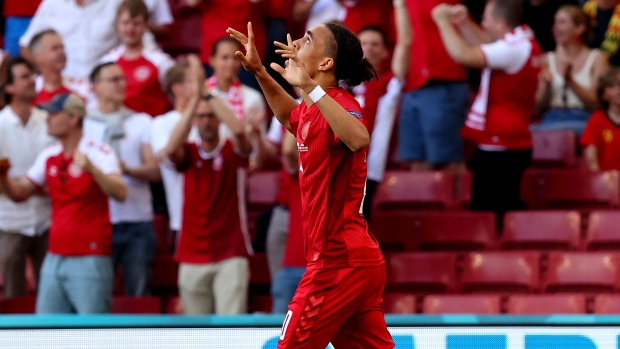 In what has been an emotionally taxing 10 days for Denmark after having lost Christian Eriksen to a cardiac episode during their first match on June 12, the Danes still have a shot at the knockout round of Euro 2020 if they can manage to pick up their first win of the tournament on Monday against Russia and get some help.

Coverage of Russia vs. Denmark begins at 3pm ET/12pm PT on TSN2 and streaming on TSN.ca, the TSN App and TSN Direct.

Perhaps, the Danes will be buoyed by the news that Eriksen has left the hospital. The Inter midfielder was discharged on Friday after undergoing a procedure to insert an implantable cardioverter defibrillator, a device that can regulate abnormal heart rhythms through the application of mild electric shock. Following his exit from the hospital, Eriksen met his teammates at Denmark’s training facility.

"Thank you for the massive number of greetings – it has been incredible to see and feel," Eriksen said in a statement. "The operation went well, and I am doing well under the circumstances. It was really great to see the guys again after the fantastic game they played last [Thursday]. No need to say, that I will be cheering on them on Monday against Russia."

With Eriksen firmly behind them, Denmark understands the task at hand. To reach the Round of 16, the Danes will need to beat Russia by at least two goals and then hope Belgium beats Finland in the other Group B matchup. It’s a steep ask, but far from impossible.

"I am more than sure that Denmark will put us under enormous pressure from the off, they'll have more possession and attack," Kuzyaev said. "But we are ready for this, ready to fight them back, we will stick to our tactics.  Everyone understands that there may not be many opportunities, so it is necessary to make most of them."

As for Russia, their fate is in their own hands. Having defeated Finland on Matchday 2, a win against Denmark would ensure a spot in the knockout round for the first time since 2008 when Russia reached the semi-finals. A draw could also get the job done for Russia should Finland fail to beat Belgium in St. Petersburg.

What's interesting is that because World Cup 2018 was in Russia and Russia's first two matches of Euro 2020 were in St. Petersburg, the match against Denmark marks the first match at a major tournament in nearly three years where Russia won't enjoy the support of home fans.

"This is going to be our first away game in two major tournaments, and without our fans," manager Stanislav Cherchesov said. "However, it's not a problem. We haven’t used the word 'problem' for the past five years. It's just a situation, and we know how to deal with it. Our task is to do our job well and get the result."

While the Soviet Union enjoyed a one-sided rivalry against Denmark, going 8-1-1, Russia has only played Denmark once since the fall of the Iron Curtain. That match came in 2012 and also happened to be in Copenhagen. On that winter afternoon, Russia were 2-0 victors on goals from Roman Shirokov of Zenit St. Petersburg and Andrey Arshavin of Arsenal.