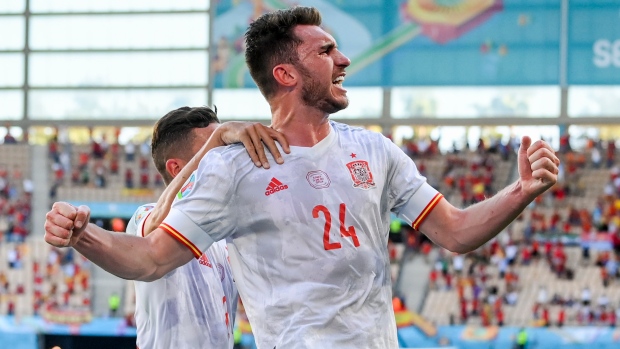 After two indifferent performances to open Euro 2020, the floodgates opened for Spain on Wednesday.

La Roja crushed Slovakia 5-0 to wrap up Group E play and punch their ticket to the Round of 16.

But it didn't appear a relaxing afternoon was in the cards for worried Spain fans when the match began. In the 12th minute, La Roja was awarded a penalty with the snakebitten Alvaro Morata stepping up to the spot. The Atletico man's disappointing tournament continued when his effort was smartly denied by Newcastle goalkeeper Martin Dubravka.

Dubravka, though, would quickly turn from hero to goat with one of the tournament's worst howlers to date. After right-back Lubomir Satka cheaply gave the ball away just outside the Slovakia area, Pablo Sarabia's dipping effort struck the crossbar. As the rebound went straight up in the air, Dubravka completely misplayed it and punched it into his own net.

Spain got a second in first-half stoppage. Dubravka left his line to come out to meet Gerard Moreno, who smartly crossed to Aymeric Laporte and the Manchester City man headed home.

Sarabia gave Spain a third in the 56th before Ferran Torres added a fourth in the 67th. A goal-mouth scramble in the 71st ended when the ball was bundled over the line accidently by Juraj Kucka for a second Slovakia own goal and Spain's comfortable fifth.

With Sweden's victory, Spain finishes second in the group and now travels to Glasgow to for their knockout round contest on Tuesday against Croatia, while Slovakia goes home.