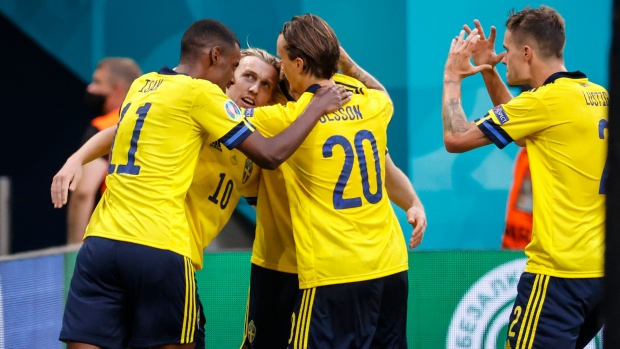 After Robert Lewandowski's second-half brace turned Group E on its ear, Sweden pulled out the three points and top spot in Group E, thanks to a late goal by Viktor Claesson, defeating Poland, 3-2, in St. Petersburg.

The win means that Sweden finishes atop the group and will play their Round of 16 match on Tuesday in Glasgow, while Poland goes home.

Sweden appeared to have an easy afternoon in the cards and would cruise to top spot in the group.

Only a minute in, Emil Forsberg took the ball from Alexander Isak to hammer home past Wojciech Szczesny for a 1-0 Sweden lead.

In the 58th, the Swedes' advantage would double on Forsberg's second of the match and third of the tournament. Juventus's Dejan Kulusevski, off the bench as a substitute, broke down the right and evaded a pair of defenders before finding Forsberg in the area to drive home with his right foot.

Game over? Far from it. Some magic from one of world football's greatest strikers brought Poland back on even terms. On a break down the left, Lewandowski cut inside his defender and hammered home with a beautiful strike to make it 2-1 in the 61st.

Lewandowski got his second in the 84th. Marcus Danielson failed to clear a Polish effort that landed at the feet of Lewandowski to slot home for his 69th international goal and a 2-2 tie.

But Sweden wouldn't be denied. Kulusevski's feed to Claesson worked deftly and the Krasnodar man poked home in the third minute of stoppage to give the Blagult a precious victory and top of the group.