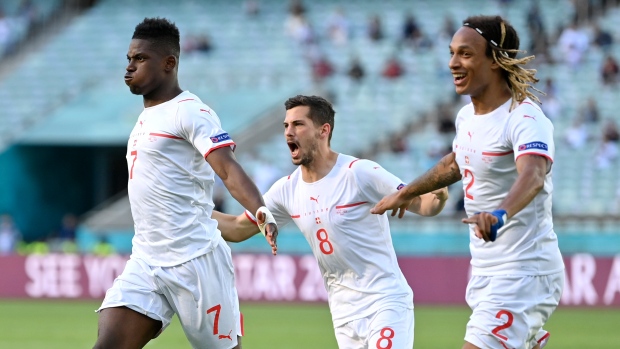 Victory is all that will matter for Turkey and Switzerland as they meet in a must-win game to close out Group A at EURO 2020.

Coverage of Turkey and Switzerland begins Sunday at 11am ET/8am ET on TSN2 and streaming on TSN.ca, the TSN App and TSN Direct.

Switzerland can still finish second in the group if they are able to earn a victory on Sunday and Wales, the team they drew in their opener, fall in their round robin finale with Italy.

The Swiss (-3) would need to finish with a better goal differential than Wales (+2)  to advance in that scenario.

The Italy vs. Wales game will kickoff simultaneously with this fixture.

After losses in their first two matches, Turkey needs a win to keep their hopes alive of advancing as one of the best third place teams.

With a minus-five goal differential to begin play, they may need to win by multiple goals to give themselves a chance in any tie-breaking scenario.

Switzerland took the lead in their opening game when Breel Embolo found the net in the 49th minute against Wales.

They eventually conceded the equalizer to Kieffer Moore and settled for a point.

A 3-0 loss to Italy in their second game has left them needing a victory from their final group stage game, something head coach Vladimir Petković has the team focused on ahead of the match.

“I spoke to the team and told them there's a match left, and three points could get us to the next round,” said Petković.

Midfielder Steven Zuber plans to use the emotions from their loss to Italy to fuel them against Turkey.

Turkey has yet to find the score sheet after being shut out against both Italy and Wales and will need to find goals if they are going to play on at EURO 2020.

While his team has failed to reach the expectations they had coming into the tournament, Turkey’s head coach Şenol Güneş says they earned their place through strong play.

"This is a young team,” said Güneş.  “They haven't experienced a tournament like this before. I know expectations were high, but this team created those expectations with their good performances."

The teams have not met since EURO 2008 when Turkey earned a comeback victory over Switzerland.

Overall, Turkey holds an 8-4-3 record over Switzerland in head-to-head meetings.