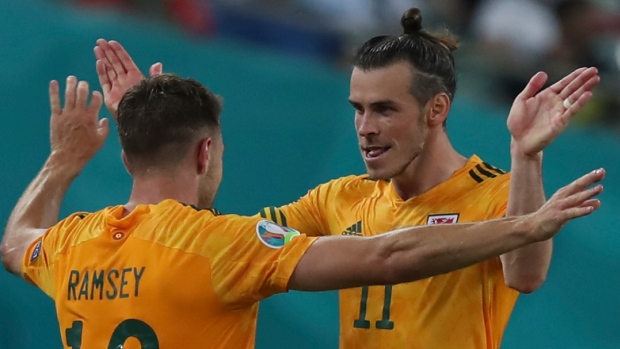 Semi-finalists in 2016, Wales got their first victory of Euro 2020 with a 2-0 win over Turkey in Baku with a stylish effort that put the team on the precipice of the knockout round.

The loss puts Turkey's chances of reaching the knockout stage on the brink.

The only goal of the match came in the 42nd minute when Gareth Bale and Aaron Ramsey connected for a fine strike. After having missed a pair of chances earlier, Juventus man Ramsey put his mark on the match just before halftime. Chesting down a beautiful pass from Bale and splitting the defence, Ramsey hammered home and past Ugurcan Cakir for his 17th goal for his country.

Ramsey, the best player on the pitch in Azerbaijan, was substituted in the 84th minute.

Bale could have made it 2-0 in the 62nd. Hewed down in the box, the referee pointed to the spot. The Real Madrid forward, who spent last season back on loan with Tottenham Hotspur, took a stutter step before hammering well over the bar.

There were chances for both sides late on with Danny Ward making a fine save on a Merih Demiral header before Manchester United's Dan James should have done better, missing a good goal-scoring opportunity in the 88th.

Defender Connor Roberts did get a second late into stoppage, sliding in a pass from Bale through the legs of Cakir

The win provisionally puts Wales on top of the group with four points ahead of Italy's match with Switzerland on later on Wednesday. A win by Italy will guarantee a spot in the last 16 for the Azzurri.

Wales will meet the Azzurri in their final match. The Turks will meet Switzerland to end their group stage campaign.