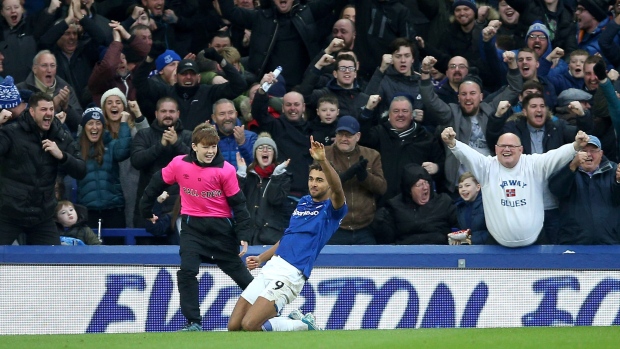 Richarlison scored the opening goal after just five minutes, rising above the defence to head home and send the animated Ferguson charging down the touchline.

It set the tone for a performance unrecognizable from the final games under Marco Silva, who was fired on Thursday.

Calvert-Lewin netted twice in the second half, either side of Mateo Kovacic's first Premier League goal for Chelsea.

Chelsea is fourth in the standings, while Everton moved to two points above the relegation zone.

Everton lost its last three games under Silva, including 5-2 to Liverpool on Wednesday, but showed much more fight in the first game under Ferguson, the former striker who played 239 league matches for the club.

Ferguson didn't have to wait long before he was punching the air and running down the touchline to celebrate Richarlison's close-range header from Djibril Sidibe's cross.

Everton then doubled its lead four minutes into the second half. Andreas Christensen and Kurt Zouma, who was on loan at Everton last season, failed to deal with a high ball and Calvert-Lewin capitalized.

But Kovacic pulled one back within three minutes with a first-time shot from outside the box after the ball was cleared into his path.

Both sides missed further chances as Walcott skipped past N'Golo Kante but shot at Kepa after ignoring Richarlison alongside him, while Christian Pulisic steered wide from Kante's knockdown.

Calvert-Lewin made the win safe when he poked a loose ball between Kepa's legs in the 84th, with Ferguson celebrating by hoisting a ball boy into the air.