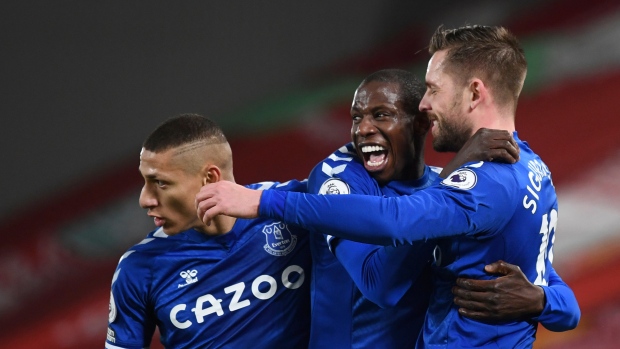 LIVERPOOL, England — Everton deepened Liverpool's Premier League title defence woes by winning at Anfield for the first time since 1999 on Saturday, a 2-0 triumph that consigned the champions to a fourth successive home loss.

It's Liverpool's worst home league run since 1923 and leaves Jürgen Klopp's side 16 points behind leader Manchester City and with Everton only behind on goal difference with a game in hand.

Everton hadn't even beaten Liverpool anywhere since 2010. The only disappointment for Carlo Ancelotti's side will have been not having any fans allowed into the home of its greatest rival, due to the pandemic, to see the landmark triumph.

“Coming here all the years and kind of letting ourselves down, but more importantly letting the blue side of the city down, it’s been hard,” Everton captain Séamus Coleman said. “We can put face on it and try to brush it off, but it’s difficult to take and you feel sorry for the fans and fed up of coming out with same clichés after losing.

“I thank the manager for the way he set us up, the players put in an unbelievable shift, and that was against the champions, so we are delighted. That’s for all the Evertonians the last number of years who have struggled.”

Everton's intention was clear from the start to get the ball forward and put the inexperienced Liverpool central defensive partnership of Jordan Henderson and Ozan Kabak under pressure.

It paid off after just 2 minutes, 25 seconds as Kabak's weak headed clearance fell to James Rodriguez who slipped in a pass behind the on-loan Schalke centre back. Richarlison ran on to fire an angled drive across goalkeeper Alisson Becker.

Hopes of a comeback were thwarted by Trent Alexander-Arnold bringing down substitute Calvert-Lewin and Gylfi Sigurdsson scoring from a penalty in the 83rd minute.