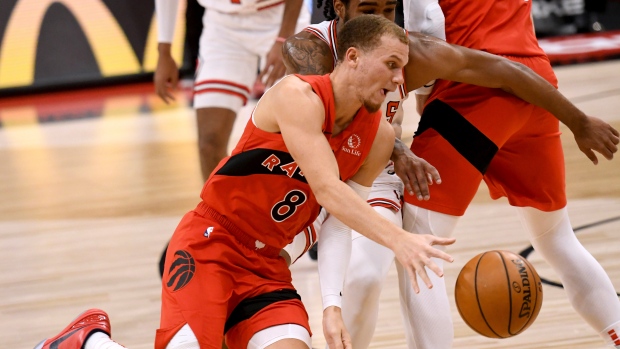 The playoffs have arrived in many fantasy leagues.

If you made it, good luck this week!

For me, this is where strategy can change in category-based leagues.

The regular season boils down to trying to win as many cats as possible, whereas in the playoffs you just need to skim by.

That's not to say unnecessarily punting categories is recommended, but it's advantageous to pay less attention to the ones you already struggle with.

Here are some streaming options for this all-important week.

** Note that I've indicated their rostered percentage in ESPN leagues in brackets.

For Raptors’ fans, Flynn's inclusion on this list shouldn't be surprising. I imagine Flynn is picked up in many Toronto-based leagues, but if not, grab him. The Raptors seem to be prioritizing the rookie's development over the past couple of weeks, hastened by the fact that Fred VanVleet is out with a hip injury.

VanVleet remains without a timetable, and will still have to serve a one-game suspension when he is healthy. Flynn has been flirting with top-100 value over the past two weeks: 10.6 points, 1.4 triples, 4.1 rebounds, 5.0 assists and 1.8 steals in nearly 30 minutes a night. The Raptors play four times this week starting Tuesday, including a couple soft matchups in the Thunder and Magic.

If Jalen McDaniels is floating around your waiver wire, you may want to scoop him up instead of Zeller, as he's getting more minutes and has a higher ceiling. However, Zeller isn't a bad consolation. PJ Washington injured his ankle in Charlotte's loss to Atlanta on Sunday, and his availability isn't guaranteed this week. Even with Washington in the mix, Zeller has been producing reliable numbers over the past two weeks: 11.0 points, 9.0 boards, 1.9 dimes, 0.7 steals, 0.4 blocks on 61.2 shooting and 85.0 per cent from the line. The Hornets also have a four-game week, starting tomorrow.

Finney-Smith is getting a ton of minutes (35 MPG) and using them to contribute robust stat lines. Over his past four games, he’s averaged 12.5 points, 2.8 triples, 7.5 rebounds, 2.8 assists, 0.8 steals and 1.5 blocks while also turning it over less than once per game. He ranks in the top 50 over the past week, and there doesn’t appear to be any threats in the way of his playing time.

Wade is worth a gamble in deeper leagues. The Cavaliers are tanking, and their rotation is full of holes with Colin Sexton, Darius Garland, Jarrett Allen and Larry Nance Jr. all out of commission at this point. Wade's last two games have shown considerable upside: 17.5 points, 4.5 triples, 6.0 rebounds 1.0 assists and 1.5 steals. Expecting this kind of production every night is unrealistic, but he will continue to log heavy minutes with all the absences in Cleveland right now.

Bazley missed over a month with a shoulder injury, and was thrown into the fire on Sunday against the 76ers. Bazley responded with a tantalizing line of 17 points (7-of-12 FGs), three triples, nine rebounds and one steal in 36 minutes. His shooting efficiency can hurt you (39 per cent from the field this season) but his ability to produce counting stats makes him a worthwhile addition, and the Thunder have four games this week.