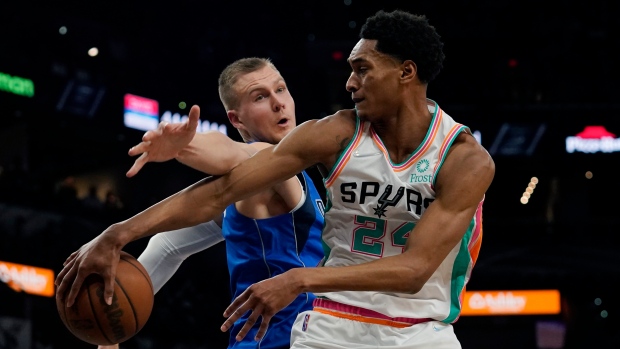 The fantasy season is rolling now, and the theme for Week 5 is the impact that health is having on rotations.

Some players are returning from long-term injuries, while minutes are being created for others by injuries to teammates.

On top of that, certain players are just finding fantasy relevance through the good old-fashioned way of performing well.

Here are five players I like as holds until proven otherwise.

The Spurs are only playing twice this week, but if Vassell is floating around your waiver wire he needs to be grabbed ASAP. The 11th pick in the 2020 draft is looking like a season-long hold, demonstrating a well-rounded real-life game that's translating into fantasy production: 15.4 points, 3.7 rebounds, 1.6 assists, 1.0 steals, 1.0 blocks on 51.9 per cent shooting while averaging only one turnover per contest over the past two weeks. Enough said.

Horton-Tucker's return from a thumb injury went very well against the Spurs on Sunday: 17 points, four rebounds, one assist, one steal and one block in 27 minutes. Expect Lakers head coach Frank Vogel to give THT a prominent role in the rotation, with Vogel saying, "He's going to be a big part of what we do." The Lakers are an old team and will be cautious with many players throughout the season. That bodes well for THT's development and playing time.

De'Andre Hunter will miss two months with a wrist injury, so the Hawks crowded wing rotation has opened for Huerter to see more time. He's played 30-plus minutes in each of the past three games and can sprinkle in a little bit of everything to flirt with top-120 value.

Hyland has offensive momentum with Will Barton and Michael Porter Jr. both on the shelf and will continue to be relied upon for his offence in this current Nuggets setup. Hyland's worth a flier over his last few games: 15.0 points, 3.0 triples, 4.0 rebounds, 3.6 assists on 48.1 per cent shooting.

Little is battling for minutes with Robert Covington in the rotation and has gotten more minutes than RoCo in each of the past three games. It's a positional battle worth keeping an eye on, as Covington has been flat lately while Little's been surging. In his past two games, Little's put up 13.0 points, 10.5 rebounds, 2.0 assists, 2.0 steals and 1.0 blocks in 28.5 minutes.