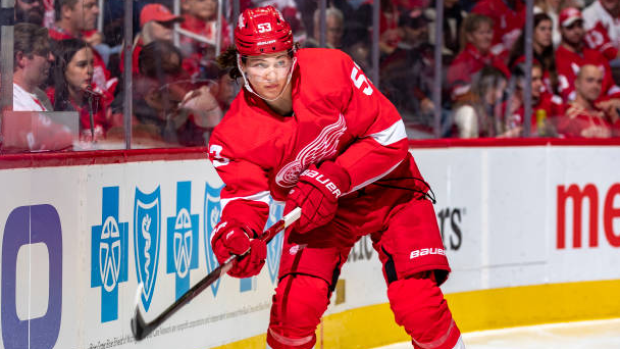 After the Boston Bruins provided us with one of the better weekly schedules for fantasy hockey leagues last week, this week is quite the opposite for the team.

Boston will play just two games over the next seven days, with both of those games coming on the weekend.

That means any fantasy hockey manager with Brad Marchand, David Pastrnak, and Patrice Bergeron, will have to make up ground elsewhere.

The Anaheim Ducks and Colorado Avalanche are the other two teams limited to just a pair of games in Week 6, although their schedules are a little more top heavy. Fringe players will be useful for the first few days of the week, but then it’s time to cut loose.

On the flip side, there are nine teams playing four games this week, with the rest playing three, which means plenty of options on the waiver wire.

Let’s take a closer look the schedule and some potential streaming options.

The Red Wings have overachieved versus fantasy expectations early on this year, and, fortunately for us, they have a very favourable schedule in Week 6.

Detroit will play Columbus, Dallas, Vegas, and Arizona – all four teams are in the bottom half in goals allowed per game – while Arizona is the worst in the league, giving up 3.93 goals per game.

Detroit has played well lately, winning four of five while scoring 3.2 goals per game during that stretch. Most of their team is on the waiver wire in a good portion of fantasy hockey leagues, so now might be the time to take a stab.

The red-hot Kings only play three games this week, but two of those games come on NHL off nights.

They’ll play the Capitals on Wednesday in one of just three games on the schedule, then they get the Hurricanes on Saturday, before finishing the week on a somewhat light Sunday against the Coyotes.

Los Angeles has won seven of eight games, scoring over three goals per game over that stretch. There are plenty of mid-range streamers to target.

Adrian Kempe started the year with just two points in eight games, playing under 16 minutes per game. He’s since been bumped up to the top line – currently playing alongside Anze Kopitar and Dustin Brown – and has seven points in his last seven games while registering close to 19 minutes per game. He’s playing on the first power-play unit, which has been middle of the pack in terms of effectiveness, but third in opportunities, so the chances will be there. He’s currently on pace for 27 goals, yet he’s still available in 60 per cent of leagues.

Moritz Seider has quickly made a name for himself in the NHL, and most fantasy leagues are paying attention, but he’s still available in 43 per cent of leagues. The 20-year-old rookie is currently ranked seventh among defencemen with 12 points in 16 games while playing more than 22 minutes per game. He quarterbacks the top power-play unit and already has five power-play points, good for 10th most among all defencemen. The 2019 sixth-overall pick is the leading candidate for the Calder Trophy and should be owned in all but the shallowest of fantasy leagues.

If you look at Evan Bouchard’s offensive numbers and think they’re coming out of nowhere, think again. Bouchard was an elite offensive defencemen in his junior years, recording 140 points over 114 games in his final two years in London, leading all blueliners in points in 2017-2018. Now playing his first full season in the NHL, Bouchard is getting elite-level ice time on Edmonton’s first defensive pair alongside Darnell Nurse, and he’s turned that into a very respectable eight points in 14 games, a 47-point pace. He’s outshooting, out-hitting, and out-blocking teammate Tyson Barrie this season, while tying him in points. Bouchard was drafted in the first round in 2018 and for good reason. Buy in now before it’s too late.

Ryan Hartman has been rotating through Minnesota’s lineup all season, sometimes playing a top-six centre roll, other times manning the wing on the bottom six. Despite that, the eight-year veteran has produced. Hartman has seven goals and 11 points in his 14 games, registering a career-high 17 minutes per game. His shooting percentage is high at 15 per cent compared to his career 9.4 per cent, so it’s likely he cools off a bit. But at just 14 per cent rostered and a four-game week on deck, it would be wise to take a shot if you have the roster space.

Mikael Granlund has been on fire to start the season. He’s recorded 16 points in just 15 games – tied with Matt Duchene and Roman Josi for the team lead – playing a career-high 20 minutes per game. His 16 points currently rank 12th in the NHL. A lot of the success has to do with his connection with Duchene. The duo has combined for 12 points in their last three games. Granlund was close to a point-per-game player back in his best years in Minnesota, so the offensive talent is there, yet somehow, he’s getting overlooked in most leagues. Take a shot to see if this continues.