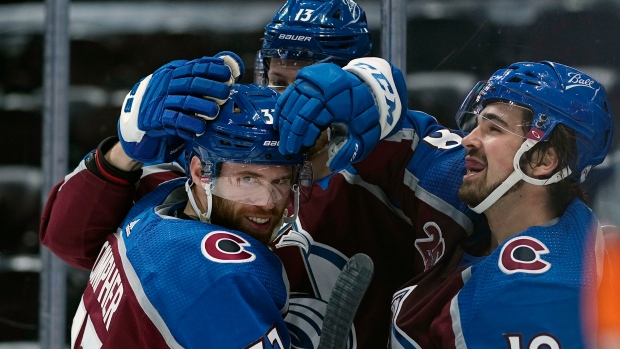 With the addition of two more postponements, what looked to be a busy week in the National Hockey League is now a little lighter.

There were initially 52 games scheduled for this week, but that number is down to 42, with a season-high six teams set to play just one game.

But we do get some four-game weeks, with the Boston Bruins, Colorado Avalanche, Seattle Kraken, and Vancouver Canucks all scheduled to play four times.

That makes those teams obvious streaming targets for the week.

All those teams play just one game, meaning any fringe players from those clubs can hit the waiver wire.

Let’s look at the teams with the best schedules in Week 13.

Colorado has one of the better schedules we’ve seen this season.

They’ll get the Kraken on Monday and finish the week off with a pair of games against the Arizona Coyotes. The Coyotes are giving up the most goals per game, while the Kraken sit third on that list.

Not that Colorado’s offence needs any help. The Avs are far and away the most potent offence in the league this season, scoring 4.32 goals per game, almost half a goal more than any other team.

The majority of the Avs are now rostered in most fantasy leagues, but we can still find some streamers down the lineup.

Boston will also play four times in Week 13, with two of those games coming against the Montreal Canadians and Philadelphia Flyers. Both teams are in the bottom 10 in goals allowed per game.

The Bruins have been on fire since the start of the new year, winning four of five and scoring over four goals per game.

Compher has missed 12 games this season due to injuries and a short COVID stint, but when he’s in the lineup he’s been a great source of secondary scoring. Compher has seven goals in his 19 games, which is a 30-goal pace. He’s been spending most of his time on the second line with the now fantasy-elite Nazem Kadri and sees time on the second power-play unit. Colorado should score a boatload of goals this week with games against the Kraken and Coyotes, and Compher should be right in the mix.

If you’re looking to take advantage of Colorado’s schedule on the defensive end, Byram is worth a look. He recently returned to the lineup after missing a month due to a head injury and has two points in his four games since. He’s now up to five goals in 17 games played. That’s a 24-goal pace over a full 82-game season. The 2019 fourth-overall pick is available in close to 80 per cent of leagues.

Haula has spent the past five games centering a line with David Pastrnak and Taylor Hall. The trio has combined for 13 points over those five games with Haula contributing a goal and three assists, easily his best stretch of the season. Boston’s offence has been on fire lately so breaking up the top six doesn’t seem likely, and if Haula remains between Pastrnak and Hall, he should continue to see an uptick in production. Available everywhere, Haula is a solid plug-and-play option during Boston’s fantasy friendly four-game week.

Rodrigues was an early season waiver target once he got bumped up to Sidney Crosby’s line, and he’s paid off in big ways for those who added him then. Rodrigues has been a point-per-game player over his past 25 games, and those numbers look even better since the beginning of December with 15 points over 12 games. Rodrigues has been doing damage on a line with Danton Heinen and Dominik Simon of late, so his production isn’t just tied to Crosby. Somehow still available in over half of ESPN leagues, Rodrigues needs to be rostered everywhere.