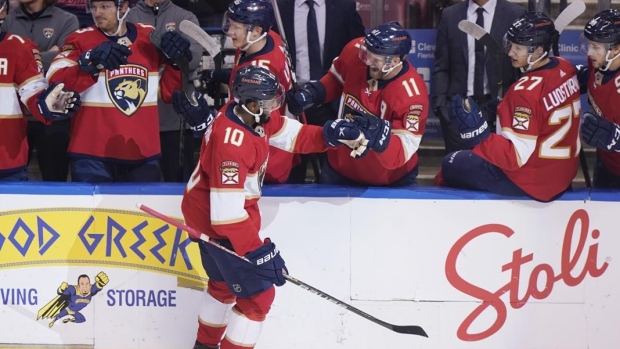 The Jack Eichel saga ended last week with his trade to the Vegas Golden Knights, although not much changes immediately for fantasy purposes.

Eichel will be out for at least three months after he has his surgery on Nov. 12, with expectations he could be out for even longer.

Time will tell, but those in redraft leagues won’t see much value from him this season, unfortunately.

Meanwhile, in terms of players who are contributing right now, Ducks winger Troy Terry continued his surprisingly torrid pace to start the season.

He added another four points in his three games in Week 4, bringing his point total to 14 on the year, good for the seventh most in the league.

He was one of our top waiver adds last week, and although his roster percentage has skyrocketed, he’s still available in 45 per cent of ESPN leagues. Make sure that’s not one of your leagues.

The New York Islanders have another brutal schedule with just one game on tap this week. It comes on Thursday against the Devils. That means one of Ilya Sorokin or Semyon Varlamov won’t even play a game in Week 5. Ouch.

On the flip side, there are 13 teams with four games apiece which means a busy schedule, and plenty to choose from when playing the waiver wire.

Boston is our top streaming team for Week 5. They begin their four-game week on Tuesday against Ottawa, before closing it out against Edmonton, New Jersey and Montreal.

The Senators are giving up the third-most goals per game this season. The Canadiens aren’t far behind in sixth, while the Devils and Oilers are at 14th and 20th respectively. Every team but the Oilers have a penalty kill percentage under 75 per cent in the early going. These should be high-scoring games.

Florida also has a four-game week, but they begin on Monday, so you’ll need to be in a daily league to take advantage of all four games.

The Panthers face the Rangers, Devils, Penguins and Lightning. All four teams are in the bottom half of the league in goals allowed per game. The Panthers are also one of three teams scoring over four goals per game. They’re set up for another big week.

Anthony Duclair has been a stud the whole season, even while playing early parts of the year with limited ice time. He had four goals in his first six games while playing less than 12 minutes per game. He’s since joined the top line with Aleksander Barkov and Carter Verhaeghe and has put up four goals and four assists in his last five games, while his ice time has been bumped up to more than 16 minutes per game. The only time Duclair averaged more than 16 minutes per game in a season was back in 2019-2020 with the Senators where he put up 23 goals in just 66 games, a 29-goal pace over a full 82-game season. There’s no reason for him to be just 33 per cent rostered.

Boston has the best schedule in Week 5, and while their top line is spoken for in all leagues, we should be able to find some value a little further down the roster. Charlie Coyle is locked into the centre role on the second line alongside Taylor Hall and Craig Smith. After a pair of pointless games to start the year, Coyle hit his stride with five points in his next five games. He’s shooting the puck more this season as well – close to 2.5 times a game – up from just 1.5 a season ago. Coyle won’t give you elite production, but with a great schedule in Week 5, he’s worth a stream. We can move on from him the following week when the Bruins play just twice.

Adam Henrique has been seeing time on the Ducks’ red-hot top line alongside Ryan Getzlaf and Troy Terry. He has 11 points in 13 games, playing over 17 minutes a game. Henrique is coming off a down year, but he did put up 26 goals in just 71 games with Anaheim in 2019-2020. His current 15.2 per cent shooting percentage is on the high side, but it’s right in line with Henrique’s career shooting percentage of 15.4. As long as he remains on that top line and top power-play unit, Henrique should continue to deliver.

Rasmus Asplund is quietly having a fantastic start to the season. The 23-year-old forward has four goals, 10 points through his first 11 games. He’s currently on the Sabres’ top line and first power-play unit, which is surprisingly fifth in the league, clicking at a 28 per cent rate. Head coach Don Granato trusts Asplund in all situations as well. He currently ranks fifth on the team in shorthanded time on ice, and fourth in power-play time on ice. If he has top-line minutes and controls the space in front of the net on the top power play, he should continue to be useful in fantasy leagues.