'It's like Gretzky and Lemieux': Button on high-level performances by McDavid, Matthews

Fantasy managers had a much easier time dealing with the NHL schedule over the past seven days.

After a pair of tough weeks that saw postponements in the double digits in Weeks 3 and 4, only one game was postponed due to COVID-19 in Week 5.

Dallas is now at the top of the list when it comes to games postponed this year. 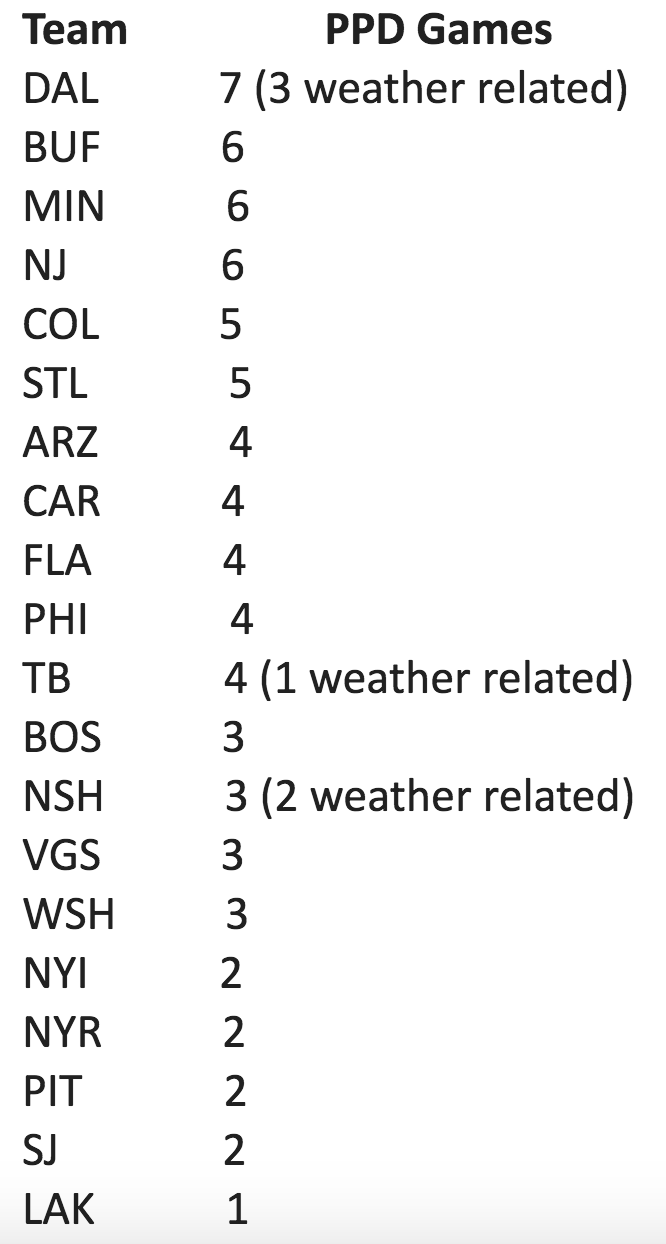 Four of the league’s previously postponed games will be made up in Week 6.

The Buffalo Sabres will be the only team to play five games this week, so look no further if you need a team to stream.

Sam Reinhart (68 per cent rostered) is available in a third of leagues. He was recently bumped up to the top line to play with Jack Eichel and Victor Olofsson, while also holding down the wing on the top power-play unit. He has four points in his past four games.

Sabres centre Eric Staal (26 per cent rostered) is worth a look in deeper leagues. He’s off to a slow start but he’s still seeing time on the second power-play unit. This five-game week could mean a little extra boost in production for the veteran.

There are 16 teams that are busy with four games this week, with the Capitals and Blackhawks among the best teams to look at for streaming.

Washington hosts the Penguins on Tuesday and Thursday before playing a doubleheader with the Devils on the weekend. The Penguins are giving up the seventh most goals per game this season.

The Caps and Pens also love to score when they meet up. In their four games already played this season, they’ve combined to score seven, nine, nine, and four goals. That’s more than seven goals per game, so you’ll want a piece of that action if the trend continues.

Capitals defenceman Justin Schultz (41 per cent rostered) is enjoying time on the Caps’ second power-play unit. The former Penguin has eight points in his past eight games, with four coming on the man advantage.

Meanwhile if you’re looking for someone on the other side, Kasperi Kapanen (25 per cent rostered) was recently bumped up to the top line with Sidney Crosby and Jake Guentzel. That should only lead to a bump in production as well.

Pius Suter (17 per cent rostered) is available in most leagues. Playing on the top line with Patrick Kane and Alex DeBrincat, he’s shown flashes of brilliance in that role.

Meanwhile defenseman Nicolas Beaudin (2 per cent rostered) has found his way to the top power-play unit and has produced four points in his last five games.

It’s a tough week for Winnipeg and Vancouver. They’re the only teams to have just two games this week, so plan accordingly.

Kevin Fiala got off to a very slow start, and on top of that he dealt with a three-game suspension at the end of January. Some managers may have already made the mistake of jumping ship. If so, it’s time to go grab him. Fiala has six goals in his past seven games, and he’s firing the puck at an incredible rate. His 3.73 shots per game are 10th in the league, just behind players like Connor McDavid and Alex Ovechkin. Remember, Fiala had a really slow start to the season a year ago before finishing with 53 points in his final 56 games, which included 14 goals in his final 18 games. The guy can score.

Joe Thornton is coming off an incredible week playing alongside Auston Matthews and Mitch Marner. The 41-year-old put up seven points in four games, and is now a point-per-game player through his first nine games with Toronto. This pace obviously won’t hold up, but he’s still worth adding while that line continues to click. Thornton is shooting at an incredible 27 per cent this year, which will come back down to earth as the season goes on. The highest shooting percentage of his career came 20 years ago when he finished at 20 per cent with the Bruins. Expect some regression closer to his career average of 14 per cent. Ride Thornton while he’s hot, but don’t set your expectations too high.

*Mark Masters confirmed this morning that Thornton will miss Monday's game against the Flames and is considered day-to-day.

Every year it seems we have goalies coming out of nowhere and becoming fantasy studs. It’s already happened this year with Kevin Lankinen in Chicago. By now it’s likely too late to grab him, but luckily for us Calvin Peterson might not be far behind, and he’s only owned in a tenth of leagues at the moment. Peterson has quietly put together a very good season, sporting a .926 save percentage and a 2.43 goals-against average. Peterson is currently splitting time with Jonathan Quick, but Peterson is outplaying him. Quick currently sits 44th in the league with a .889 save percentage. Look for Peterson to get the majority of the starts moving forward, and while we likely won’t get the numbers and production we’re seeing out of Lankinen in Chicago, Peterson could just prove to be a valuable asset in fantasy leagues currently hurting for goalie starts.

Nino Niederreiter is scoring at an elite rate in Carolina. He’s currently 13th in goals per game with nine through his first 16 games, a 46-goal pace over a full 82-game season. He’s also top 20 in 5-v-5 goals per 60 minutes. Playing on a red-hot line with Vincent Trocheck and Martin Necas, that trio has combined to put up 22 points over their past seven games. Niederreiter has actually been fairly productive with the Canes since joining them. In 2018-2019 he put up 30 points in 36 games, a 68-point pace. Admittedly last year was a struggle, but consider the fact that Niederreiter was playing just 15 minutes per game and finished the year with a career-low 9.6 shooting percentage. You could argue that was an outlier season, and the real Niederreiter in Carolina is more like the guy we’re seeing now and saw two seasons ago.

The last time Evgeni Malkin finished a season recording less than a point per game was all the way back in 2010-2011. It was also the only time that happened. One of the most consistent players of the decade, Malkin is off to a curiously slow start. It’s no time to panic. Malkin is getting incredibly unlucky to start the year. The Penguins power play is somehow only clicking at 14.9 per cent, which is sixth worst in the league. With the talent on that team, that will change. Malkin’s power-play points per 60 minutes is at an absurdly low 2.34 this season, compared to 6.09 for his career. His 8.3 shooting percentage would be the lowest of his career since the 2010-2011 season as well. Positive regression is coming, and so is the production. He’s too good of a player to be held to just two power-play points through 16 games. Buy low.