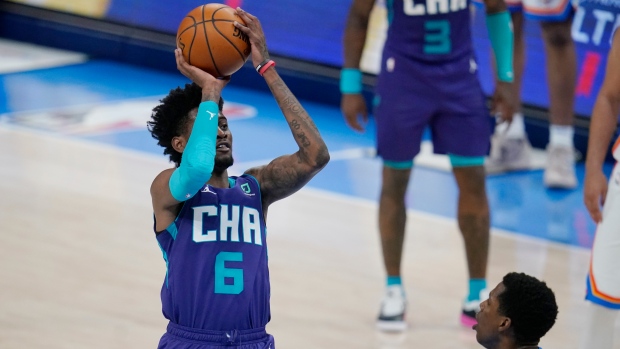 Jalen McDaniels hadn't played more than 24 minutes or scored more than 10 points for the Charlotte Hornets this season before his breakout performance on Wednesday. In his first career start, McDaniels played 32 minutes and scored a career-high 21 points.

For Friday night and likely the rest of the season, the Hornets are down two starters with LaMelo Ball and Gordon Hayward both injured. Top bench scorer Malik Monk is also sidelined. The team is now flirting with McDaniels joining Miles Bridges and P.J. Washington in the starting lineup.

The one-game sample of McDaniels seeing a large role in the Charlotte is a decidedly small sample, but also one that saw him finish second on the team in shot attempts and third in 3-point volume. Available in free agency in 99% of ESPN leagues, here's a chance to get a starter for the price of a roster spot.

Cory Joseph has been productive since shifting to Detroit. He faced the Kings last night -- his former team -- and paced the Pistons with 24 points on 14 shots. The point total is a season high and good for the second-most points in a game for Joseph in his career. With Detroit so thin in the backcourt, Joseph could actually sustain some fantasy relevance if he continues to enjoy such license to create his own shot.

The Jazz improved to 23-2 at home this season, good for the best home record in the NBA. Mitchell has scored 78 points in his past two games, tied for the most over a two-game span in his career. Rudy Gobert pulled down 20 rebounds for the 13th time this season and now trails only Truck Robinson, who has the franchise record with 16 20-rebound games in a season.

We learned a while ago that Bobby Portis becomes a strong fantasy option whenever Giannis Antetokounmpo doesn't play. With Giannis sitting last night, Portis tallied 20 points and 14 rebounds in a loss to the Mavericks.

Toronto's Boucher established new career high in points and rebounds Thursday. Entering that game, his career peak in points was 30 and his high in rebounds was 16. He joined Chris Bosh and Vince Carter as the only players in Raptors history with a performance that includes 35 points and 15 rebounds.

With Kyle Lowry and Fred VanVleet sidelined, Malachi Flynn got his first career start for Toronto. The rookie guard dished a team-high eight assists, and he now has multiple steals in five consecutive games.

The Pacers list Malcolm Brogdon as questionable for tonight's game against the Magic. All-Star Domantas Sabonis is also questionable. Myles Turner is out with an ankle injury. This could be another T.J. McConnell show for Indiana.

Clint Capela and De'Andre Hunter are questionable to play for the Hawks tonight against the Bulls.

Lonzo Ball and Brandon Ingram are listed as questionable for tonight's game against the 76ers.

Victor Oladipo left last night's win over the Lakers due to a knee injury. It's unclear what the timeline is for the injury, but we'll learn more in the coming days.

John Wall is out for the Houston Rockets due to load management. Eric Gordon, David Nwaba, and Danuel House Jr. are all out due to injuries, as well. This leaves a ton of minutes, touches, and shots for a consolidated rotation to divvy against the Clippers tonight.

With Wall and Gordon off the floor this season, Kevin Porter Jr. trails only Christian Wood in usage rate on the team. Porter has averaged 7.8 assists per 36 minutes in such scenarios. The streamer to consider is Jae'Sean Tate, who has enjoyed a team-high 6.9% spike in usage and team-best leap in DraftKings production whenever Wall and Gordon sit.

Top players to watch on Friday

Zion Williamson scores in the paint at a rate not seen since prime Shaq. Joel Embiid protects the rim at an elite level. The two meet tonight in New Orleans in what is arguably the best matchup of the entire nine-game slate.