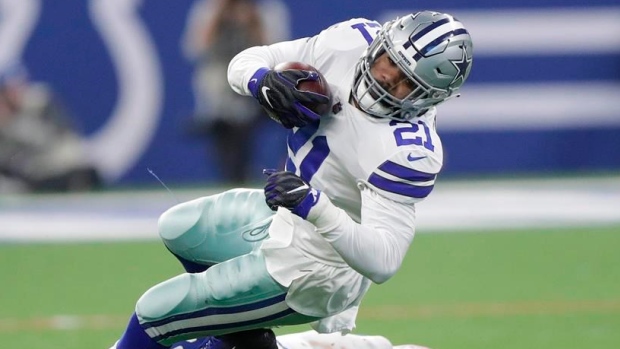 Week 17 typically plays out as one of the more bizarre weeks in the NFL with some intense playoff battles, some teams giving up early and others resting their stars to get a look at some younger talent.

Because of this, most season-long fantasy championships are held during Week 16 and some of the biggest daily fantasy tournaments will conclude with "main event" prize pools this week, but savvy fantasy players should still be on the lookout for traps similar to the last week of the season.

Last week, the Jacksonville Jaguars gave star tailback Leonard Fournette 10 carries in the first half before giving him just one in the second half to get a longer look at backup David Williams. The Arizona Cardinals gave Chase Edmonds 38 per cent of snaps and the Denver Broncos have been leaning heavily on a trio of young wideouts — DaeSean Hamilton, Courtland Sutton and Tim Patrick.

DFS players targeting teams out of contention should be particularly wary when considering veteran players. Luckily, there are several teams with plenty on the line this week that we can look to target for daily contests.

Dallas is a 7 1/2 -point home favourite against Tampa Bay in a game where the Cowboys control their playoff fate while the Bucs have long been out of contention. The Bucs have a bottom 10 defence from a fantasy perspective against every position, and it is a strong spot to target quarterback Dak Prescott and running back Ezekiel Elliott, who both are ranked inside the top 5 of DailyRoto's Week 16 value ratings. Prescott and Elliott make for a solid cash game foundation, and Prescott can also be paired up with either Amari Cooper or Michael Gallup in tournaments. While the Bucs are projected to be trailing, their offence still ranks first in the NFL in total passing yards, and they'll need to lean heavily on the passing attack. DailyRoto likes both Chris Godwin and Adam Humphries to command more than 20 per cent of the targets, particularly if DeSean Jackson were to be limited or remain out.

Pittsburgh travels to New Orleans to play in the Superdome, fondly referred to as "The Coors Field of the NFL" in daily fantasy sports after the high-scoring Colorado Rockies baseball stadium. This game will rightfully be a popular target in both cash games and tournaments, and with a 53 1/2-point total it is projected by Vegas to be the highest scoring game on the main slate. The big news fantasy owners are waiting on is the status of Steelers running back James Conner, who will likely be a game-time decision for the second consecutive week. His availability will impact the viability of Jaylen Samuels (just $6,700 on FanDuel) in tournaments.

Look for JuJu Smith-Schuster to lead the way for the Steelers receivers. He has drawn 48 targets over the previous four weeks compared with 40 for Antonio Brown. At a cheaper price tag than Brown, Smith-Schuster could also command lower ownership from people looking at last week's box score and seeing Brown's touchdown. The Saints have allowed the most fantasy points to opposing wide receivers and this is a prime spot.

It's also a bounceback chance for New Orleans, who will look to rebound after scoring only 50 points on their recent three-game road trip. Drew Brees has averaged over 300 yards passing at home over the previous two seasons, and pairing him up with PPR options Alvin Kamara and Michael Thomas is a viable option as the Saints look to clinch home field advantage throughout the entire playoffs.