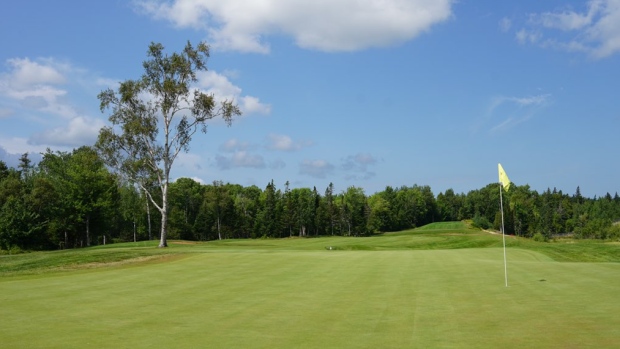 CARDIGAN, Prince Edward Island —Joey Mayo had a clean scorecard in Wednesday’s opening round of the Prince Edward Island Open. The American from Paducah, Kentucky, playing in his first career Mackenzie Tour – PGA TOUR Canada tournament, birdied six holes at Dundarave Golf Course for a 6-under round of 66. He is tied for the lead with Victoria, BC’s Maxwell Sear. American Samuel Anderson is alone in third, a shot back.

“I hit the ball really nicely and was pretty stress-free most of the day,” said Mayo. “I rolled it nicely, saw a few go in and the ones I missed were all around the hole so everything was working pretty solidly.”

Starting his round on the back nine, Mayo gained momentum just before moving to his second nine.

“I birdied 16-17-18 to make the turn at that point at 4-under,” said Mayo. “I was feeling pretty good and thought that I could keep it going on the front nine.”

Sear also opened with a 66 despite making a double bogey on No. 4. He offset that only blemish with eight birdies, surprising himself with how well he played in round one.

“I kind of had low expectations coming in,” admitted Sear. “I drove from Osprey (Caledon, Ontario) on Sunday, so I’m a little tired. I didn’t let that get to me, I guess. I struck it well all day.”

Wisconsin’s Anderson circled seven numbers on his scorecard, including a stretch of five birdies in six holes.

“I think everything was just pretty solid,” said Anderson. “I wouldn’t say anything was fantastic, but I took advantage of the par 5s—I think I birdied every one of those. I only had one bogey today, so yeah, everything was pretty consistent. I hit fairways, hit greens, made a few putts.”

“I really like the golf course. It’s in awesome shape, the ball rolls a mile out here, the greens are rolling nice; got some great views on some of the holes out here. It’s an awesome golf course.” –Joey Mayo

“I was keeping myself in position all day, and it was nice to get a few putts to drop. I hit a few close wedges there and hit a few chips up there close to give myself a look.” –Samuel Anderson on his run of five birdies in six holes (Nos. 17-4)

“I might go try to find a beach to jump in the ocean and kind of enjoy the Island a little bit; go do some exploring and put my feet up too.” –Maxwell Sear on his post-round plans

“It’s an awesome course for the Tour. You’ve got to hit some really quality shots to play well, and it’s nice and long, which is good for my game anyway. There’s some really nice views too, so it’s been unreal so far.” –Maxwell Sear