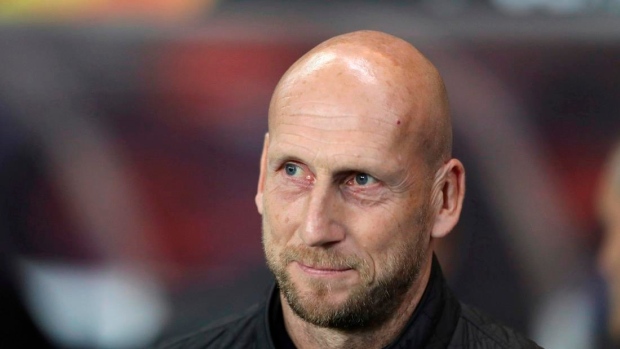 The Manchester United legend had been in charge of the club since May of 2020. In their third Major League Soccer campaign, Cincinnati currently sits 13th in the Eastern Conference, 17 points behind CF Montreal for the final playoff spot.

“We believe a change in leadership is in the best interest of the club at this time, and a new general manager will lead the search for a new head coach," club president Jeff Berding said in a statement. "We are an ambitious club and we remain focused on achieving our goals, the first of which is making Cincinnati a championship city. We thank Jaap for everything he has done for FC Cincinnati during his time here, and we wish him the best as he can now head home to be with his family.”

The club had previously fired GM Gerard Nijkamp in August.

“Tyrone has been a valuable addition to our coaching staff since he arrived earlier this year with plan to be the future coach of our MLS2 team,” said Berding. “He has shown his coaching ability and leadership qualities, and he is the right person to inject new energy into the locker room and help our squad finish 2021 strong with an eye to the future.”

Stam, 49, had served as manager at both Reading and Feyenoord before taking the Cincinnati job.

A Netherlands international in his playing days, Stam was a member of United's treble-winning 1999 squad. He also spent time with Lazio, Milan and Ajax.

Cincinnati is next in action on Wednesday with a visit to Toronto FC.