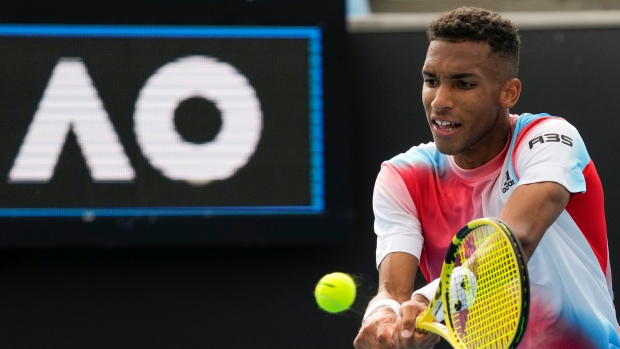 It certainly wasn’t easy for Felix Auger-Aliassime in round one.

The Canadian battled back to win the final two sets and advance to the second round of the Australian Open on Tuesday, where he will face Alejandro Davidovich Fokina Wednesday night.

The Canadian took the first set 6-4 against 90th-ranked Emil Ruusuvuori of Finland early Tuesday, but the wheels came flying off in the second.

Ruusuvuori took the frame 6-0 and the third set 6-3 to push Auger-Aliassime one set away from Canada’s third first-round defeat after Leylah Fernandez and Rebecca Marino fell in the opening round on the women’s side.

But the 21-year-old from Montreal dug deep, taking the final two sets 6-3 and 6-4 to survive an opening-round scare that lasted nearly four hours and set up Wednesday’s showdown with Davidovich Fokina.

“I like my improvement from let’s say years ago or months ago. Today I was able, where even being led two sets to one, to find a way back and win. It’s an important win, every win is important in a Grand Slam. “I’m just relieved. Relieved I was able to find a way through,” Auger-Aliassime said.

“I would have loved to be out of there in an hour and 30 but that’s not the reality. The reality is everybody’s great, [Ruusuvuori] is a great player. He could have won today.”

“Felix is still young in the Grand Slam experience and it’s another positive one. It’s the kind of first round that when you go through it’s very important, because now he has the memory that he can come back and stay focused for five sets,” Auger-Aliassime’s coach, Frederic Fontang, told TSN’s Mark Masters.

Davidovich Fokina, the world’s 50th-ranked player from Spain, scored a straight-sets victory over Alex Bolt in the opening round and comes into the year’s first Grand Slam on an upward trajectory since turning pro in 2017.

But so does Auger-Aliassime.

He began 2022 with a bang, helping Canada to a men’s ATP Cup victory in Sydney alongside Denis Shapovalov, Brayden Schnur and Steven Diez.

The world’s ninth-ranked player is also coming off his best run at a Grand Slam at last September’s US Open, winning his first five matches before falling to Russia’s Daniil Medvedev, who ended up beating Novak Djokovic in straight sets in the final.

Meanwhile, Denis Shapovalov is the only other Canadian remaining in either men’s or women’s singles play at the Australian Open. He defeated Kwon Soon-woo of South Korea in five sets late Tuesday night to book a spot in the third round, where he will take on No. 23-seeded American Reilly Opelka.