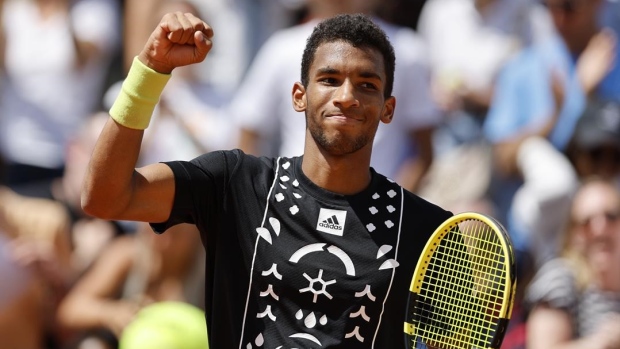 PARIS — Canada's Felix Auger-Aliassime and Leylah Fernandez advanced to the third round of the French Open on Wednesday while Bianca Andreescu was eliminated in straight sets.

Auger-Aliassime made quick work of Argentine qualifier Camilo Ugo Carabelli, winning 6-0, 6-3, 6-4 to reach the third round of the Paris major for the first time in his career.

The 21-year-old Montreal product, the tournament's ninth seed, fired eight aces and converted on five of 10 break points in a dominating display on the clay at Roland Garros.

Auger-Aliassime looked much more confident against Carabelli than he did in his shaky opening-round 2-6, 2-6, 6-1, 6-3, 6-3 victory over Peruvian qualifier Juan Pablo Varillas on Sunday.

"It was a better start than my first round, for sure," he said. "I think that gave me confidence that if I kept going this way and won my service games and stayed aggressive and tried to dominate, I would give myself a good chance to win in straight sets."

Auger-Aliassime's next match is Thursday against Serbia's Filip Krajinovic, who defeated Borna Gojo of Croatia 7-6, 6-2, 5-7, 6-1.

"I think I just played a really good match, especially on important points in the first set," Fernandez said. "In the second set, I was happy I was able to keep that offensiveness and keep going for my shots, and I'm glad that the balls went in when it mattered."

Later in the day, Andreescu dropped a 6-2, 6-4 decision to No. 14 seed Belinda Bencic of Switzerland.

Andreescu, from Mississauga, Ont., made a late charge by winning three straight games late in the second set before Bencic held serve for the victory.

Bencic, who won Olympic gold at the Tokyo Games last summer, will meet Fernandez in a third-round match on Friday.

This report by The Canadian Press was first published May 25, 2022.