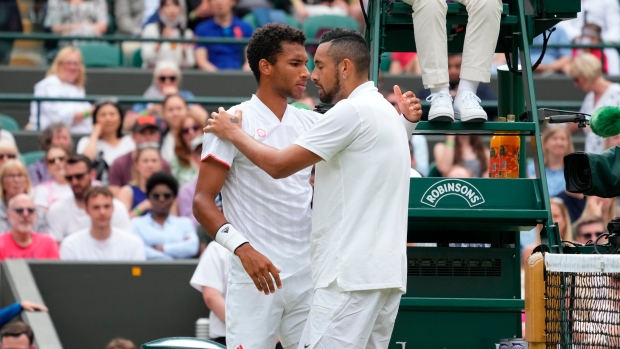 LONDON — Montreal's Felix Auger-Aliassime is the latest Canadian to reach the fourth round at Wimbledon.

The 20-year-old advanced Saturday when Nick Kygrios retired due to an injury in their third-round matchup at the grass-court Grand Slam.

Kygrios won the first set 6-2 and Auger-Aliassime took the second 6-1 before the Australian bowed out due to an apparent abdominal injury.

The Canadian said he was just starting to settle into the match when his opponent retired.

"I was playing good. Of course it's unfortunate that he had to pull out, but on my side, you know, I felt like I was playing just better and better," Auger-Aliassime said. "Of course I would have liked to finish the match and win, but that's how it is. I'm through to the next round, and that's the most important."

After suffering an injury near the end of the first set, the Australian struggled to hit the ball and Auger-Aliassime won five straight games to take the second set.

He joins fellow Canadian Denis Shapovalov in the round of 16. The 22-year-old from Richmond Hill, Ont., trounced All England Club favourite Andy Murray 6-4, 6-2, 6-2 on Friday to advance to the fourth round.

Shapovalov, seeded 10th in the tournament, will play No. 8 Roberto Bautista Agut of Spain on Monday.

Auger-Aliassime is set to face No. 4 seed Alexander Zverev of Germany the same day. The pair have played three times previously, with Zverev winning each matchup.

"It's a big challenge for me. Never beat him before. First time we have played in a slam," Auger-Aliassime said.

Zverev has a great serve and solid backhand, he added, things the Canadian will be aware of heading into the match.

"I feel good. I know he feels good too. He's one of the best players of our generation, no doubt," Auger-Aliassime said.

"He's got everything in his game. I'm going to try to find ways to give myself chances. But I need to start by protecting my own serve and then just play aggressive and try to dominate."

Monday will mark Auger-Aliassime's first appearance in Wimbledon's round of 16 and his third in the fourth round of a Grand Slam.