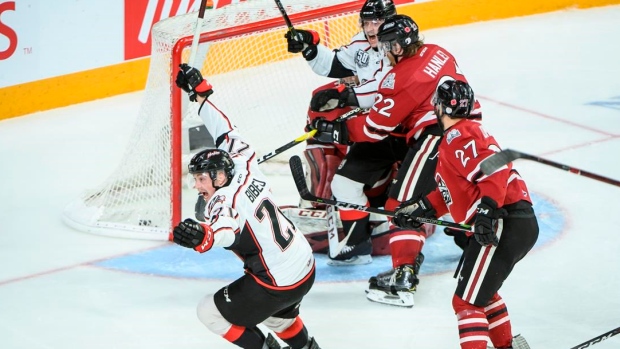 HALIFAX — Felix Bibeau has pushed his Rouyn-Noranda Huskies into the Memorial Cup final.

Bibeau scored two third-period goals — including the winner — as Rouyn-Noranda beat the Guelph Storm 6-4 on Friday in the tournament semifinal to set up a championship showdown with the host Halifax Mooseheads.

The 20-year-old, who leads the tournament with four goals, broke a 3-3 deadlock from the slot 5:20 into the third with a shot Storm goaltender Anthony Popovich never saw, then added another from nearly the same spot to give his club some breathing room with 7:27 to play.

"After my second goal I was on the bench like 'holy, it was the same thing,'" said Bibeau, who was surprised to get two scoring chances from the same area.

"It was a good feeling, saw my parents in the corner, step mom, sister came. It was a great feeling knowing family was watching back home. I know I will get some texts saying, 'good job' and 'good luck Sunday.'"

Sunday's Memorial Cup final will be a rematch of the QMJHL final that Rouyn-Noranda took in six games. The Huskies also beat Halifax 4-3 on Wednesday in the final round-robin game.

"I think we played our best game since the start of the tournament," said Huskies coach Mario Pouliot, who will go for back-to-back championships after winning in 2018 with the Acadie-Bathurst Titan.

"I think it started with the third period against the Mooseheads (Thursday), we found our rhythm."

"One trophy every single junior player dreams of," said Storm defenceman Sean Durzi. "Knowing I'll never get another chance hurts so much."

Guelph, Rouyn-Noranda and Halifax finished tied with 2-1 records after round-robin play. The Mooseheads won the tiebreaker to earn a bye right to the final while the Storm and Huskies were forced to go the semifinal route.

The Western Hockey League champion Prince Albert Raiders were sent home early after going 0-3 in the preliminary round.

"The last nine weeks have been quite a ride for sure, lots more ups and downs," said Storm coach George Burnett, who is 0-for-3 at the Memorial Cup after losses in 1998 and 2008.

"I didn't think we were our best tonight.... but still had an opportunity late in the game with the goalie out to even it up. I'm so proud of the guys top to bottom."

Beaucage picked up a loose puck in the slot and backhanded the puck past Popovich, who looked unsure of his surroundings and appeared to lose sight of the puck, 4:58 into the game to open the scoring.

Ratcliffe replied 1:30 later when he finished off a 2-on-1 rush with MacKenzie Entwhistle with a snapshot blocker side on Harvey, and Hanley beat a screened Harvey with a point shot exactly 60 seconds after his captain scored.

Teasdale made it a 2-2 game when he stole the puck from Durzi near the Guelph net and roofed it over Popovich before the netminder even knew what was happening at 9:31.

Ralph got in close and took a feed from Zachary Roberts before roofing it short side over Harvey's blocker at 5:53, and the early onslaught of goals continued when Hinam beat Popovich with a wrist shot off a faceoff win by linemate Peter Abbandonato only 54 seconds later to make it 3-3.

"We always answered back with goals," said Pouliot. "We were happy with the win, but more importantly the way we played."

As the game went deeper the benches got smaller and it seemed as if Pouliot had star defenceman Noah Dobson out every second shift to shut down Guelph's best players.

Dobson didn't seem fazed by all the ice time he had and got in for a breakaway with 3:06 to play only to be hooked from behind by Dmitri Samorukov. Dobson was given a penalty shot but missed when the puck rolled off his stick.

Guelph pulled Popovich and kept up its pressure to make it interesting, with Ratcliffe making it a one-goal game with 1:13 to go before Harvey-Pinard scored an empty-netter.

"We were really pouring it on and I had every belief in my mind we were gonna get one there," said Durzi. "They did a good job blocking a shot, I saw Harvey-Pinard racing the other way and I just remember I was crushed."

Note to readers: This is a corrected story. A previous version had the incorrect year for George Burnett's second Memorial Cup appearance.