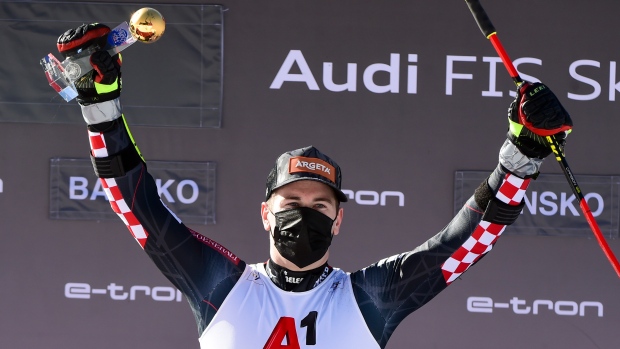 BANSKO, Bulgaria — Filip Zubcic won the first men’s World Cup race after the skiing world championships Saturday to give new impetus to the battle for the season-long giant slalom title.

The Croatian skier overtook first-run leader Mathieu Faivre, who won the world title last week, to win by 0.40 seconds. Unheralded Stefan Brennsteiner was 0.93 behind in third for the Austrian’s first career podium.

Zubcic closed the gap on discipline leader Alexis Pinturault to just 22 points with three giant slaloms remaining. The next race is Sunday.

“It was an incredible race, incredible skiing. I am so happy and so proud of myself, of my team,” Zubcic said after his second win of the season and third overall.

It was a tough day on the slopes for Canadian skiers. Calgary's Trevor Philip did not qualify and Erik Read of Canmore, Alta., did not finish his first run.

Zubcic has finished on the podium eight times in the last 11 giant slaloms dating to last season.

Pinturault dropped from third in the opening run to fourth, after the Frenchman skied most of his final run with just one pole.

He lost the pole after hitting a gate with his right hand early in his run. He was obviously slowed but did remarkably well to navigate his way down through the remaining gates and finished 1.06 off the lead.

Pinturault won the previous three giant slaloms on the World Cup circuit and seemed on his way to gold at the worlds eight days ago before skiing out in his final run, handing victory to his French teammate Faivre.

Henrik Kristoffersen was fourth going into the second leg but finished 17th. The Norwegian just avoided skiing out early in his run, forced to brake to make the next gate after sliding off the line.

Kristoffersen won the GS title last year but has only two top-10 results in seven races so far this season.

Zubcic trailed Faivre by 0.11 after the opening run and put pressure on the Frenchman by posting the 10th-fastest time in the second leg.

“That was the best thing, that I attacked from the start,” Zubcic said. "I knew it was going to be really, really, really tough, because it was really turny and bumpy.”

Faivre soon lost the advantage in his final run but settled for second place, his best result on the World Cup circuit since finishing runner-up in a GS in Austria in October 2019.

Faivre won the world titles in GS and the parallel event but has not triumphed in a World Cup race since 2016.

“After the world champs, I just wanted to keep the pace and to keep the momentum,” Faivre said after the first run. “I feel really good on my skis and I have a lot of pleasure to be on skis and to push hard.”

Pinturault extended his lead in the overall standings to 230 points over Marco Odermatt. The Swiss skier finished Saturday’s race in fifth.