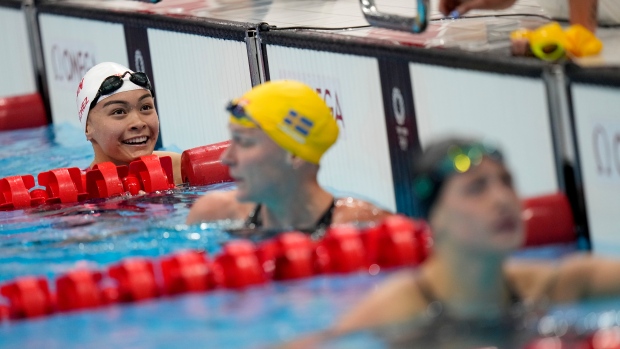 After years of seeing Canadian swimmers compete, it was only when Kayla Sanchez won medals at the Tokyo 2020 Olympics that Grace Uy and her brother Rowen saw someone who looked like them on the podium.

Grace Uy, 14, from Toronto has been swimming competitively at the North York Aquatic Club with her 16-year-old brother for years.

"It was really nice to see someone like me win in such a big competition," said Uy, whose father is from the Philippines.

Sanchez's performance in the pool and her ethnic background have given her hope about what can be achieved, Uy added.

She said her dad loves watching the Olympics and was excited to see people of Filipino descent winning medals.

"He said something like, 'Oh, that could be you. You're just like her. You could do that,'" Uy said her father told her after Sanchez's medal-winning performances.

"It was just really nice to see representation because there isn't a lot of that always when you join something, like swimming."

Rowen Uy, Grace's brother, said seeing Sanchez compete and win medals in the Olympics was a change from the 2012 and 2016 Games, when there weren't any Filipino-Canadian athletes.

"I kind of want to go to the Olympics one day as well and compete on that same level. So for me, that kind of proves that it doesn't matter where you come from," he said.

Isabel Tuason, the president of the University of Toronto's Filipino student group, said Sanchez's win has made members of the group really proud.

"It's part of our culture to showcase our pride. It's a whole win for the Philippines and for every Filipino in any country they are in," she said.

A former competitive swimmer herself, Tuason said she didn't use to see a lot of representation in the sport and was the only southeast Asian person in her swim club in Markham, Ont., years ago.

"It (can) really empower Filipino youth in Canada and this just proves how talented and hardworking Filipinos are," she said.

Sanchez, 20, grew up in Toronto with Filipino immigrant parents, Noel and Susana.

In an interview, Noel Sanchez expressed awe at his daughter's swimming talent, noting that she wasn't as tall as her competitors.

The Olympian has mentioned being aware of looking different from other swimmers around her, her father said. Noel Sanchez said his daughter was proud to represent Filipinos amid the diverse pool of swimmers in the clubs she was part of.

"She said she gets messages of support about being an inspiration to Filipinos," he said, adding that he's also read about other young Filipino-Canadian athletes who say they look up to his daughter as an inspiration and want to be like her someday.

"It warms my heart. To think that that's my daughter. Never in our wildest dreams did we think she'll be an Olympian — or an Olympic medallist!"

Sanchez said he hopes his daughter will inspire more Filipinos to take on sports.

"What I can say to Pinoys is that our height or ethnic background is not a hindrance to do well in sports. It's not easy but with dedication and hard work, we can do it," he said.