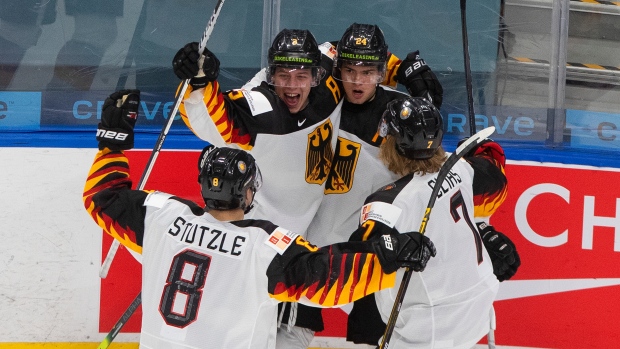 EDMONTON - Finland improved to 3-0 with a 6-0 win over Slovakia on Wednesday at the World Junior Hockey Championship in Edmonton.

The win sets up a showdown with Canada (3-0) for first place in Group A on New Year's Eve.

Slovakia finished the preliminary round with one regulation win, one overtime loss and two regulation losses. The team has secured a spot in the quarterfinals.

Germany withstood a late barrage to beat Switzerland 5-4 and improve to 1-1-0-2 in preliminary round play.

The victory secured the Germans a spot in Saturday's quarterfinals.

Buffalo Sabres prospect John-Jason Peterka opened the scoring 4:38 in, added a second goal before the end of the first period, and completed his hat trick with an empty-net strike late in the third.

Tim Stutzle, picked third overall by the Ottawa Senators at this year's NHL draft, had two goals and three assists for the Germans.

Germany was up 5-2 with less than three minutes on the clock, but Switzerland (0-0-0-4) refused to go quietly, with Noah Meier and Simon Knak adding goals in the final minutes.

Noah Delemont and Ronny Daehler also scored for the Swiss.

Germany's Florian Bugl stopped 31-of-35 shots, and Thibault Fatton made 20 saves for Switzerland.