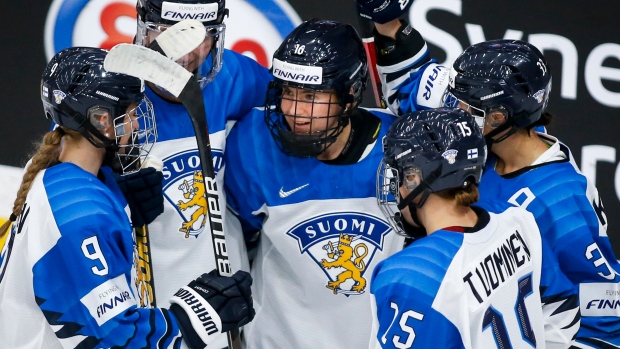 CALGARY — Finland won its first game of the women's world hockey championship Wednesday with a 4-0 blanking of Russia.

Russian starter Valeria Merkusheva allowed three goals on nine shots. She was replaced in the first period by Nadezhda Morozova, who made eight saves.

Russia finished the preliminary round in Pool A with a 1-3 record.

Finland faces winless Switzerland (0-3) on Thursday in a game that will determine third place in the pool.

Canada and defending champion United States take their 3-0 records into Thursday's games against each other.

The quarterfinals are Saturday followed by Monday's semifinals and the medal games Tuesday.

Meanwhile, Dominika Laskova scored twice and the Czech Republic (4-0) beat Germany (2-1) 2-0 on Wednesday to win Group B and avoid having to face the United States or Canada in the quarterfinals.

Denmark (0-4) and Hungary (1-3), the two promoted teams, also met in search of their first win of the tournament, with the Hungarians coming away with a 5-1 victory.

The host Finns were the silver medallists in the 2019 world championship in Espoo.

Finland lost the gold-medal game to the U.S. in a 2-1 shootout after beating Canada 4-2 in the semifinal.

Also, the Swiss announced top forward Alina Muller is out for the tournament because of an ankle injury she suffered in the second period of Saturday's 3-1 loss to Russia.

Muller was the leading scorer in the 2018 Olympic women's hockey tournament with seven goals and three assists in six games. She was named best forward in that tournament.

This report by The Canadian Press was first published Aug. 25, 2021.