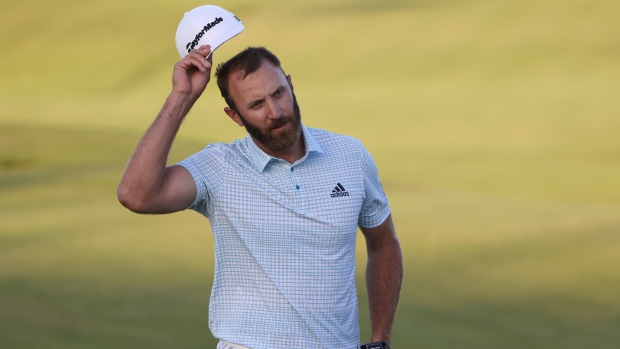 After Collin Morikawa put on a dazzling display of precision to win the Open Championship at Royal St. George's on Sunday, the PGA Tour heads to Blaine, Minn., for the 3M Open.

Morikawa, who won his second major title in as many years (2020 PGA Championship), is not in the field, as just four of the top-20 golfers are competing.

Dustin Johnson, fresh off a top-10 finish at the British Open, is the overwhelming favourite to taste victory over Louis Oosthuizen and Tony Finau on Sunday.

Oosthuizen led after 54 holes of the Open, but suffered yet another crushing blow in a major championship.

This is just the third time this tournament has been contested, with Matthew Wolff winning in 2019 and Michael Thompson emerging victorious last year.

Going low is paramount for success at TPC Twin Cities, as the two winning scores were 19 and 21-under par, respectively.

This is the last tournament before next week's Olympic men's golf competition will be contested in Tokyo.

There aren't many more chances for those players who are outside the top 125 on the FedEx Cup points list to make the playoffs, with this being the third-last “regular season” event.

There are four Canadians participating this week in Minnesota, each considered unlikely to claim the trophy come Sunday.

Adam Hadwin, who missed the cut at Royal St. George's, has the shortest odds at +9000.

Hadwin has had success here in the past, having placed fourth two years ago.

Roger Sloan, who has made six of his last seven cuts, is a 175-to-1 long shot to earn his first title.

David Hearn and Michael Gligic are in the same boat, and are unlikely to win in the eyes of oddsmakers, as they're both 300-to-1 to get into the winner's circle.

Here's our first look at the field for the 3M Open.

Wolff has found success at this course

The game of golf is better for having the exciting and quirky swinging Matthew Wolff in the mix, and he's returned after taking off 10 weeks to clear his head.

He earned his very first title on the PGA Tour in 2019 as a fresh-faced 20-year-old at this championship.

Wolff won in thrilling fashion, draining a lengthy eagle putt on the 72nd hole to defeat Bryson DeChambeau and Collin Morikawa by a stroke.

He then backed that up with a strong T-12 result as the defending champion last year.

In his eight rounds at this venue, Wolff has unsurprisingly ranked high in several strokes-gained categories.

He's first in both total strokes gained and tee-to-green, second in SG: approach and third in ball striking.

In his return to golf at the U.S. Open, he was in the mix to win in the final round at Torrey Pines.

He eventually placed a respectable T-15, showing that he still has a ton of talent.

His +3000 odds to win outright are intriguing and are solid value, which is longer than the top-four golfers on the board.

Based on his short history at this track, Wolff could find himself in contention yet again.

We've been high on Hank Lebioda in the last month, and for a very good reason.

The unheralded lefty has made his last seven cuts, racking up five top-20 results in that span.

He's been in contention to earn his first victory the last three tournaments, finishing T-5 at the Travelers Championship.

Lebioda followed that up with a tie for fourth finish at the Rocket Mortgage Classic, where he was just a shot out of the playoff.

In his most recent outing, Lebioda ended up T-8 after a final round of 65.

Fifteen of his last 20 rounds have resulted in scores that were sub-70.

At +5000 odds, Lebioda is very enticing this week, especially since he’s not competing against a stellar field.

One PGA Tour player who has an unfortunate last name is Adam Schenk. His surname sounds a lot like the word that no golfer wants to do or hear – ’shank’ (unleash a wild shot).

Schenk has been doing his best to prove he's more than just a golfer with a funny name, as he's quietly made nine of his last 11 cuts.

In five instances, he's posted a top-25 finish or better.

His last two events have been strong, as he was T-4 at the John Deere Classic and T-15 at the Barbasol Championship.

Schenk had a brush with victory at the John Deere, as he led on the back nine Sunday before an untimely bogey hurt his chances.

In his last 12 rounds, Schenk is fifth in total strokes gained and eighth in putting.

He's certainly not a big-name golfer but this championship has been kind to players unaccustomed to winning, like Schenk.

Realistically, top 5/10/20 bets are probably more likely to cash than a ticket for Schenk to win outright, but he's more than capable of having a strong event yet again this week.