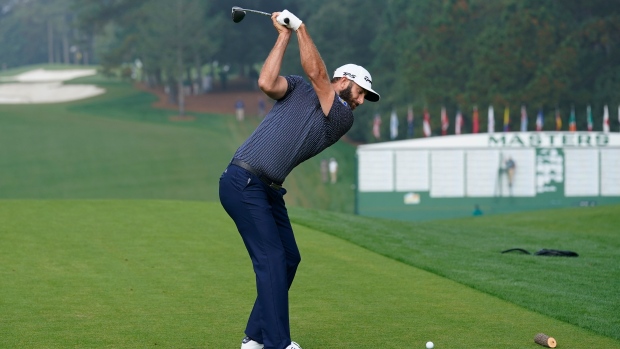 After capturing his first career green jacket back in November, Dustin Johnson will stroll down Magnolia Lane as the defending champion in search of his third major victory.

He is looking to become the first golfer since Tiger Woods in 2002 to win back-to-back Masters titles.

DJ is the +900 favourite to win outright over a quartet of golfers, including Jon Rahm, Bryson DeChambeau, Justin Thomas and Jordan Spieth.

Spieth ended his lengthy winless drought in thrilling fashion at last week’s Valero Texas Open, his first trip back into the winner’s circle since the 2017 Open Championship.

Spieth, who won the 2015 Masters and famously collapsed in his title defence the following year, comes in with a lot of confidence after a stellar 2021 campaign.

There are storylines aplenty, with Rory McIlroy looking to capture the final leg of the career grand slam, Brooks Koepka teeing it up following knee surgery, Rahm competing after the birth of his first child and plenty others.

Eighty-eight golfers will tee it up at Augusta National, with three Canadians in the field.

Corey Conners, who tied for 10th in the pandemic-delayed Masters in November, has the shortest odds to win outright at +7000.

Mackenzie Hughes is a huge dark horse to earn his first career major championship at +25000.

After middling play throughout 2021, he had his best showing at the WGC-Dell Technologies Match Play, where he had a T-9th finish.

Weir did make his first cut in his last six Masters attempts late last year, before eventually settling for a T-51.

Here's our first look at the field for the 85th Masters tournament.

As the calendar turned to 2021, Jordan Spieth had become an afterthought at the Masters in futures bets with his game in a tailspin.

There was a time you could’ve wagered on him to win his second green jacket at +5000 odds, but all that changed when he shot a scintillating 61 in the third round at the Phoenix Open in February.

While he didn’t win that week, that started a stretch of seven events where in six of them he was T-15 or better.

After finally emerging victorious for the first time since the 2017 Open Championship (a span of 82 tournaments), Spieth has all the momentum coming into a venue he’s been dynamite at in the past.

Though his odds have dropped from +5000 to +1100, Spieth is still a golfer that must be on your radar entering the week.

There’s a famous expression in golf – “beware the injured golfer.”

That’ll be in the forefront this week, as Brooks Koepka returns, following knee surgery, to a place, like Spieth, where he’s been fantastic.

Early in 2021, the four-time major champion seemed poised to add to his haul of major titles after getting healthy and winning the Phoenix Open that Spieth contended in.

Two tournaments later, Koepka nearly picked off another trophy, finishing in a tie for second at the WGC-Workday Championship at The Concession.

Following discomfort in that event, Koepka decided to shut it down for the last five weeks.

Most strokes gained tee-to-green per round at #TheMasters since 2015 (min. 10 rounds played):

Oftentimes, competitors who have an ailment play with nothing to lose and end up competing better than people expect.

If Koepka played as well as he did before the injury, his odds to win outright would be half of what they are now at +2500.

Not only did he win two U.S. Open titles and two PGA Championships from 2017-19, he very nearly slipped into a green jacket, which would complete three legs of the career grand slam.

His best shot came in 2019, when he was one shot short of Tiger Woods’ epic victory.

He followed that up with a T-7th at last November’s Masters.

At +2500 odds and his innate ability to contend in the toughest tests, Koepka must be strongly considered this week.

It wouldn’t be shocking to see Listowel, Ont.,’s Corey Conners on the first page of the leaderboard.

Last November, Conners did just that, finishing in a very respectable T-10 position.

In his last three stroke play events, he’s been very impressive, resulting in a third at Bay Hill, a seventh at the Players Championship and a T-14 at last week’s tour stop in Texas.

Conners is an elite ball striker, ranking inside the top-15 in key strokes gained categories such as off-the-tee (10th), tee-to-green (12th), approaching the green (13th), and total strokes gained (14th).

If he can even putt half decently, he should have a solid week, and he’s improved in that regard.

This year Conners is 74th in SG: putting after being 181st the last two seasons and 176th the campaign before that.

It may be too much to expect him to snag a green jacket given that he has just one tour victory, but a top-five or top-10 bet on the 29-year-old is very palpable.

Before the last two tournaments, it appeared the best golf of Matt Kuchar’s career may have been in the rearview mirror.

Something clicked for the nine-time PGA Tour winner at the WGC-Dell Technologies Match Play where he eventually wound up in third place, and then at the Valero Texas Open, Kuchar was T-12th.

He’s had a strong run around this venue as well, with four top-eight results, the most recent being a T-4 in 2017.

Time may be running out for the 42-year-old veteran to win that elusive first major championship, but another grizzled greybeard in Lee Westwood has shown recently that age is but a number in his quest to keep up with the young guns.

Kuchar could find himself back in the mix this weekend at very tantalizing +8000 odds.