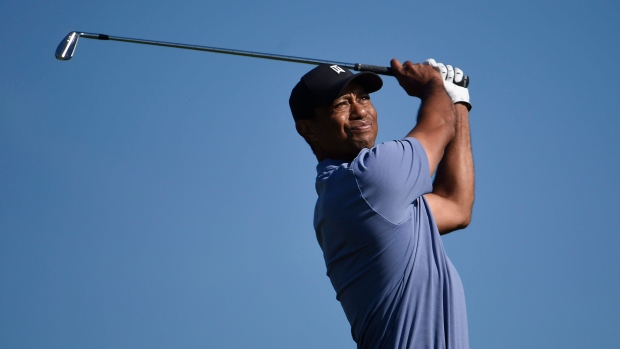 Colin Morikawa delivered a performance that will be remembered for a very long time to win last week’s Workday Charity Open.

Morikawa entered the event as a significant longshot at +3300 to win.

All he did was erase a three-shot deficit with three holes to play and then subsequently won a three-hole playoff against Justin Thomas to take the title.

One week later, Morikawa will have a chance to double dip at Muirfield Village Golf Club at much shorter odds.

Morikawa is listed at +2000 to win the Memorial Tournament hosted by Jack Nicklaus.

It’s a unique situation with the best in the world set to tee off for the second PGA Tour event in a row at this course in Dublin, Ohio.

It also marks the return of Tiger Woods to competitive golf for the first time since the Genesis Invitational way back in February, though he did play 'The Match: Champions for Charity' alongside Peyton Manning in May.

Woods will look to add to his record five titles at this track.

However, he'll be up against a stacked field with 27 of the top 30 players in the world set to participate.

The co-favourites to win are Bryson DeChambeau and Justin Thomas.

DeChambeau, who has been taking the tour by storm since its return, including winning the Rocket Mortgage Classic in his last outing, is listed at +1000 to win outright.

DeChambeau won the 2018 edition of this tournament, and comes in with a remarkable seven straight top-8 finishes on tour.

He’s joined at that price by Justin Thomas, who very nearly won his 13th career PGA Tour title last weekend before falling to Morikawa in the playoff.

Patrick Cantlay, who is ranked 10th in the world, is the defending champion at this event and also finished tied for seventh in last week’s Workday Charity Open.

Low scores are the norm at Muirfield Village, with double-digit under par winning scores in all but two years (2008, 2012) here since 1990.

Here is our first look at the field for the Memorial Tournament.

Tiger back on his personal playground

If you are looking for a horse for the course this week, Tiger is definitely a good player to start with at Muirfield Village.

Over the last two years, he’s placed T-23rd and tied for ninth at this event.

Tiger also hasn't played in an official competitive tournament in five months, so expecting him to jump right in against a stellar field is a tall task, even for him.

That said, he was off for two months after the conclusion of the 2019 FedEx Cup Playoffs and then won the Zozo Championship in his first start back for his record-tying 82nd career PGA Tour title.

Despite his past dominance at Jack's tournament, he's up against guys who've played the first five events since the hiatus against an incredibly deep field.

A top-10 or even a top-5 bet is absolutely reasonable.

However, you might be able to find better value than taking Tiger to win outright at +2000 – tied for the sixth-shortest price on the board.

Muirfield may have been built by Jack, but it's been owned by Tiger

The last time we saw Tiger Woods he was partnered with Peyton Manning. While he looked free and fluid that day, it's hard to predict what a return of Tiger will look like. What we do know is that the house that Jack built, has a tenant in the penthouse.

DeChambeau keeps on chugging along

After taking a much-deserved week off following his victory at the Rocket Mortgage Classic, bulked up Bryson DeChambeau returns this week at a track where he won in 2018.

Trying to pick any holes in his game is extremely difficult, given that he was first in strokes gained: off-the-tee and putting in Detroit.

The only stat that is glaringly bad is his proximity to the hole, which ranks a very pedestrian 146th on the circuit.

Despite that he's racked up fantastic results.

In his last seven appearances, the 'Mad Scientist' has been nothing short of remarkable, contending in all of them.

There's no obvious reason not to expect Bryson to be right back in the thick of things yet again.

The only potential stumbling block to seeing him lift his second consecutive trophy is simply the quality of the players he's up against.

When he won the Rocket Mortgage Classic, none of the top-five players in the world were competing.

He’s made the cut all three times he’s played at this venue.

Betting on a top-5 finish isn't a ridiculous ask of DeChambeau.

Longest drives of the week for @B_DeChambeau:

HORSE FOR THIS COURSE

As I noted last week, aside from an uncharacteristic missed cut last year at the Memorial, Matt Kuchar has been a model of consistency at this venue.

The 2013 champion has four top-five results here since 2007, including a runner-up at this tournament in 2011.

He is, however, come off a rather uninspiring tie for 39th finish last week at the Workday Charity Open.

That number alone makes him an intriguing value option.

Viktor Hovland is the only golfer to compete in each of the first five tournaments since the restart and make all five cuts.

He punctuated that with his best result yet - a solo third-place finish at Muirfield Village last weekend.

The 2020 Puerto Rico Open champion has been on a heater of late, finishing T-11th, T-12th, T-21st and T-23rd in his previous four starts before placing third last week.

Nobody has scored better tee-to-green in the last three tournaments.

Apart from DeChambeau, you'd be hard pressed to find a golfer that is playing more consistently currently.

Prior to the tour stoppage, Jon Rahm was on an absolute tear with three victories and made cuts in 17 of his 18 previous starts.

However, he has really struggled for the most part since returning to action.

In his first three starts back from the break, Rahm placed no better than a tie for 33rd.

Despite finishing last week’s Workday Charity Open with a sizzling 64 on Sunday, Rahm still only managed to finish T-27th.

In his lone appearance at the Memorial Tournament in 2017, he missed the cut.

While he has all the talent in the world and is certainly capable of winning any tournament he enters, +2000 isn’t an enticing enough price to convince me it’s worth betting on Rahm against an elite field at the Memorial this week.

*All Betting Information appears as listed by Bodog on Tuesday, July 14, 2020.