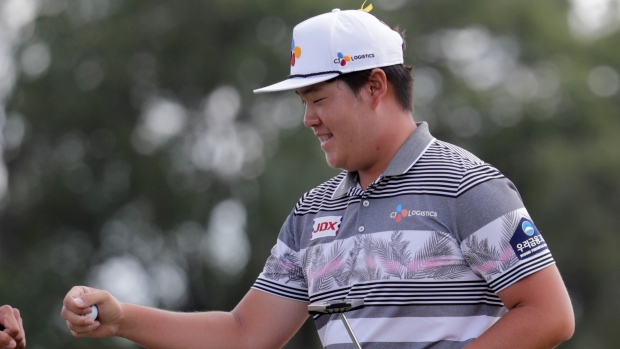 The week after Dustin Johnson won his first career green jacket at the Masters, the PGA Tour heads three hours down the road to Sea Island for the RSM Classic.

DJ entered the Masters with short +900 odds to win outright, and he defeated Sungjae Im and Cameron Smith by five strokes for his second career major championship.

Johnson and Smith are not entered into this tournament, but golf’s iron man Sungjae Im will be teeing it up.

Only two of the top-10 golfers in the world rankings will compete this week - Webb Simpson and Tyrrell Hatton.

Simpson, who has lost in a playoff twice at this event, is the outright favourite to win his third title of 2020.

Simpson is followed by Im and Hatton, who each have one win on the PGA Tour this year.

In the 10 times this tournament has been contested, close finishes have been the norm with eight of the 10 being won by one stroke or a playoff.

It has also been a breeding ground for first-time champions, with five of the past six winners making the RSM Classic their maiden victory.

That includes Canada’s Mackenzie Hughes, who took home this title in 2016.

Corey Conners, who finished T-10th at last week’s Masters, has the best odds to win among the five Canadians competing at +3500.

Conners is followed by Hughes, who is a +6600 long shot to earn his second victory at this track.

Adam Hadwin, who missed the cut at Augusta National, is next on the board at +11000 to get back into the winner’s circle.

Nick Taylor, who made the weekend at the Masters and finished T-29th, sits at +15000 while David Hearn, who didn’t qualify for the event, is a huge darkhorse at +25000.

Here is our first look at the field for the RSM Classic.

Simpson has done everything but win RSM Classic

There’s a very big reason why Webb Simpson enters this week as the favourite to win outright at the RSM Classic, and that’s because of his stellar track record at this tournament.

Last year, he very nearly snagged a victory, eventually losing in a playoff to Tyler Duncan.

In 2018, he was squarely in the mix as well, finishing solo third, a shot out of a playoff.

Way back in 2011, Simpson was also in a playoff at this event, where he wound up losing that one to Ben Crane.

The two-time winner this year has been on a strong stretch of golf, where he’s been no worse than T-17th in the last seven times teeing it up.

That includes top-10 results at the Masters and U.S. Open.

A bogey-free 67 was just the start Webb Simpson was looking for. #themasters pic.twitter.com/CAcS8tD8Rn

Simpson has been his typical strong self tee-to-green, where he’s gained shots on the field in 12 of his last 13 tournaments in that category.

Considering there’s not a ton of upper-echelon players and how well he’s been playing, it’s mildly surprising he isn’t an even bigger favourite.

At +1000 odds, that’s more than comfortable to be wagering on the seven-time PGA Tour champion.

Past Six Winners of RSM Classic

It’s not a stretch to suggest that Mackenzie Hughes could take home his second RSM Classic based on how well he’s been playing.

The 29-year-old has made 13 of his last 14 cuts and has already posted two top-10 results in the early season.

Hughes was third at the Corales Puntacana Club Championship and T-7th at the Vivint Houston Open.

In 2020, Hughes has seven top-10 finishes, most notably a runner-up at the Honda Classic.

It is a bit odd that after tasting victory at this event in 2016, he’s followed that up by posting two missed cuts and a T-65th result last year.

Hughes has been dynamite with the putter, gaining strokes on the greens compared to the field in 17 of his last 18 events, which will be critical for success with bunches of birdies required.

Another player that has been racking up some really high finishes is Sam Burns, and he’d continue the trend of first-time winners at this event.

In his start at the Vivint Houston Open, Burns held the 54-hole lead before eventually finishing tied for seventh.

Earlier in the season, he led the Safeway Open after 36 holes and also placed seventh.

His calling card is his ability to gain strokes off the tee, where he was 16th on tour last season.

Burns has gained shots in the field in that category in 17 of his last 18 tournaments.

In Houston, he was even better tee-to-green where he gained an absurd 11 shots on his competitors.

At +6600, there’s some really good value on a player on the cusp of breaking through.