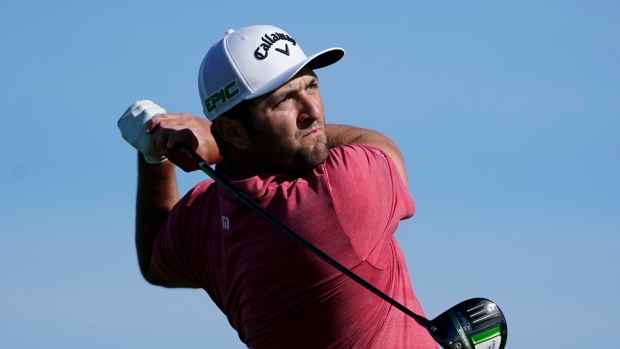 Reed, who won at Torrey Pines as one of the +2500 favorites last week, has opted to play the European Tour’s Saudi International this week instead of competing in Phoenix.

Normally, a litany of fans cram into the par-3, 16th hole but due to COVID-19 protocols, only 5,000 spectators will be on the grounds to watch this year’s event.

Jon Rahm, who was in contention throughout the weekend last week in San Diego, is the betting favourite to win this week over Justin Thomas, both of whom haven’t won this tournament in their careers.

Four of the top-10 golfers in the world will tee it up – Rahm, Thomas, Rory McIlroy and defending champion Webb Simpson.

Close finishes have been the norm in recent years, with four of the last five events ending in a playoff. Rickie Fowler’s triumph in 2019 was the lone exception.

Just three Canadians are teeing it up this week, but are unlikely to earn the trophy on Sunday.

Corey Conners has the shortest odds at +6600 following a run of eight straight made cuts.

Adam Hadwin is +10000 after a T-18th showing at last week’s Farmers Insurance Open.

Finally, Nick Taylor, who has been in contention to win his last three events through 36 holes before disappointing third rounds, is a +15000 longshot to earn the title.

Here's our first look at the field for the Waste Management Phoenix Open.

A couple of players who don’t have the biggest fanfare but have dominated at this tournament are Webb Simpson and Hideki Matsuyama.

Despite having won on this course, they aren’t among the top four betting favourites to win so you can snag them at really solid value this week.

Simpson is the defending champion and also was a runner-up (in a playoff) in the 2017 version to – you guessed it – Matsuyama.

Webb Simpson's first ace on Tour earned him a share of the lead at the Waste Management Phoenix Open 🙌pic.twitter.com/CT4FBBBJUF

He’s made the weekend in 13 of his last 14 starts, with a tie for second at the Houston Open and T-3 at the BMW Championship his highest finishes.

With Hideki at +2200 odds to win outright and Simpson at +1600, they sport fantastic value compared to the top favourites to earn the victory this week.

Despite saying over the years that he hates this track, Bubba Watson has had a number of high finishes at this event and it’s been a huge surprise that he hasn’t lifted the trophy.

The last two years Bubba has contended as well, resulting in a T-4 in 2019 and a tie for third last year.

Though he missed the cut at the Farmers Insurance Open, the mercurial lefty had a tie for fourth and a tie for seventh towards the end of 2020 in a return to form.

In the last 36 rounds at TPC Scottsdale, Bubba is first in ball striking and strokes gained off the tee among players teeing it up this week.

The two-time Masters champ has been second in total strokes gained during that span at the Waste Management Phoenix Open.

At +5000 odds, you’re getting Watson at very good value given how well he’s played here many times in the past.

A golfer who has been playing really well of late is 2019 Wells Fargo Champion and social media super star Max Homa.

In the last three times teeing it up, he’s been close to capturing his second trophy, resulting in T-12, T-21 and T-18 finishes.

Two starts ago at the American Express, he was a 54-hole co-leader before a tough final round knocked him out of contention.

In those events, he’s ranked sixth in total strokes gained among those playing in Phoenix.

Last year, Homa had a very strong showing here where he ended up in a very solid tie for sixth.

For a player that gets hot in stretches, Homa is on the upswing and could very well add to his trophy collection this week and, at long +7000 odds, he’s very intriguing. At the very least, a top 5/10/20 bet on him could be profitable.