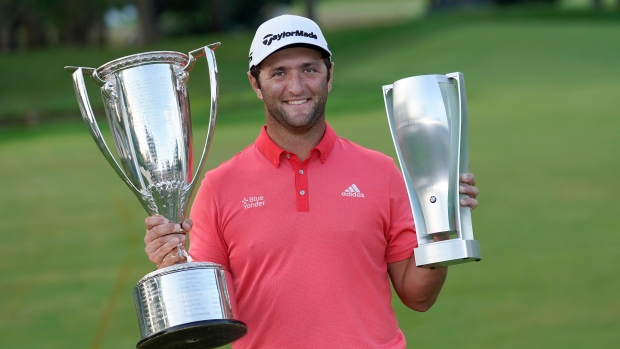 The second iteration of the Zozo Championship has a different venue than the inaugural event last year at Narashino Country Club in Japan.

With COVID-19 concerns keeping the PGA Tour from returning, the venue this week is Sherwood Country Club in Lake Sherwood, Calif., just outside of Thousand Oaks.

Tiger Woods returns as defending champion at a track where he's won five times in his career.

El Tigre has also had a remarkable five runner-ups at this venue when it hosted his Hero World Challenge event.

That tournament hasn't been hosted at this track since 2013.

Like last week's CJ Cup at Shadow Creek, this is a limited 78-man, no-cut event.

Jason Kokrak broke through for his first PGA Tour victory in Las Vegas last week as a +8000 dark horse to win outright.

Jon Rahm opens up as a +900 favourite to win the title over the likes of Xander Schauffele and Justin Thomas.

The field is stacked, boasting eight of the top 10 players in the world, with the exceptions being Bryson DeChambeau and Dustin Johnson, who had to withdraw for yet another week due to a positive COVID-19 test result.

Four Canadians are teeing it up, each considered a long shot to earn a victory.

Adam Hadwin has the shortest odds at +10000 to win his second tour title.

Finally, Nick Taylor has the longest odds of the Canadians at +25000.

Here is our first look at the field for the Zozo Championship at Sherwood.

Betting Odds To Win The Zozo Championship at Sherwood – Top-15

Though it has been many years since defending Zozo Championship winner Tiger Woods has competed at Sherwood Country Club, one thing is for certain – Tiger immediately steps onto the property with a huge amount of confidence.

This week, Tiger has an opportunity to overtake Sam Snead for most wins all-time on the PGA Tour after he matched him with his 82nd victory at the Zozo Championship last year.

As much fun as it would be for Tiger to take home another title, it's difficult to expect it to happen, despite his fantastic track record around Sherwood Country Club.

After beginning 2020 with a tie for ninth at the Farmers Insurance Open, his results haven’t been pretty, where he hasn't even sniffed a top-10 finish since.

Woods enters this tournament with +3300 odds to win outright, simply because of his name and track record around this course.

That number should probably be double what it is, particularly because he’s lost shots to the field in five of his last six events on the greens.

However, it’s important to keep in mind that you could’ve said virtually the exact same thing about Woods heading into last year's Zozo Championship, which he won.

So while I think it’s unlikely Tiger wins here again, it wouldn’t be the most shocking outcome.

Horse for this course

One golfer listed at the same price point as Tiger that is worth considering is Matthew Wolff.

He entered last week's CJ Cup at Shadow Creek on the heels of back-to-back runner-up finishes at the U.S. Open and the Shriners Hospitals for Children Open.

Then he laid an absolute egg, finishing 73rd in the 78-man field.

However, Wolff grew up near Sherwood Country Club and has said he’s played the course “thousands of times.”

The 21-year-old prodigy went to Westlake High School seven miles from this venue, so there will be a great deal of familiarity for him this week.

Don't be too concerned about him needing to display form the week before winning. Preceding his maiden victory at the 3M Open last year, Wolff went CUT-T-80-T-50 in the three prior events.

If there was ever a player to jump on at decent value it’s Wolff this week.

Through 54 holes at last week’s CJ Cup, Russell Henley held a three-stroke lead on the field.

A closing final round of 2-under 70 saw him get passed by Jason Kokrak, where he eventually settled for a T-3 finish.

That was Henley’s third top-10 in his last five starts.

In those tournaments, he hasn't finished any worse than 27th.

Henley has moved up 96 places in the world rankings subsequently, going from 172nd to 76th.

Known to be a streaky player, the three-time PGA Tour champ has also made nine of his last 10 cuts.

His tee-to-green game has been on point also, where he's gained strokes on the field in 12 of the last 13 events he's played.

His +4000 odds are appealing for how well he’s been playing of late, especially last week where he nearly got back into the winner’s circle.