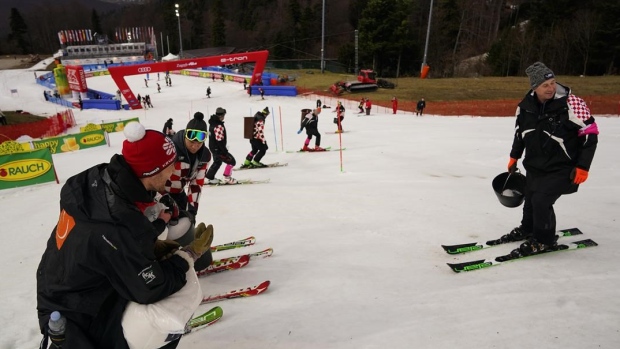 The FIS race director of the men’s Alpine skiing World Cup said Saturday a slalom in Zagreb two days ago should not have been started, calling the decision-making process “not acceptable.”

The race in Croatia was stopped after 19 skiers started on a muddy course that quickly deteriorated before ruled too dangerous to continue when holes in the weak snow surface appeared.

French skier Victor Muffat-Jeandet fractured his right fibula when he skied out. He will miss the Beijing Olympics as he needs surgery, he said in an Instagram post.

Markus Waldner, the International Ski Federation race director who was not present at Thursday’s race, told Austrian TV “you saw at inspection you could not race there. There were 60 racers at the start, but it worked for 10. You should not start such race, it’s as simple as that.”

Waldner was absent in the Croatian capital as he had already traveled to the circuit’s next stop in Adelboden, Switzerland. He was replaced as race director at the event in Croatia by FIS official Emmanuel Couder.

The slalom was interrupted several times as course workers tried to smoothen holes in the weakened snow surface. TV footage showed Couder discussing over and over again with local organizers whether to continue the race, though the event was only stopped for good after Waldner intervened by phone.

“But that was already too late, the race should never have started,” said Waldner, adding that Couder was put “under massive pressure” by local organizers to keep the race going.

“How things went there is just not acceptable. There is no compromise. The referee, Emmanuel Couder in that case, has the final word and the final decision."

According to Waldner, local organizers "took the upper hand a bit, which was not correct, and became aggressive and the whole process was not correct.”

The race had been moved from its initial slot on Wednesday, a day after the women contested a floodlit slalom on the same course in difficult conditions.

“That was on the limit. You could discuss whether we shouldn’t have held that race: There were more leaves on the slope than snow,” Waldner said about the women’s race.

The race director said he will evaluate the men’s race with FIS management next week.

“We don’t take for granted what happened,” Waldner said. “Let’s see what we can do in future. This way you cannot race World Cup events. This is no advertisement for our sport. It’s implausible and destroys the whole sport.”