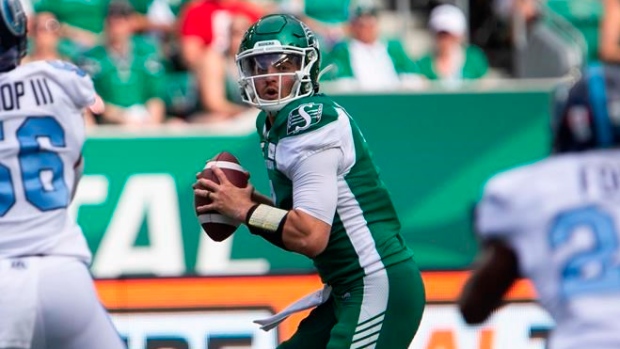 Week 3 of the CFL season had many entertaining moments. The Stampeders had an inspiring comeback led by their backup quarterback, while the Bombers defence was able to snuff out an Eskimos comeback in the final minutes. The Tiger-Cats and Roughriders had big outings from their gunslingers in landslide wins. However, there are still lots of uncertainties around the league. Here are five questions following Week 3 in the CFL:

1. Do the Riders have their guy in Cody Fajardo?

There were a lot of questions coming into this season about Saskatchewan Roughriders starting quarterback Zach Collaros. Then Collaros went down on the very first drive of the season in Hamilton. Cody Fajardo and Isaac Harker split reps behind centre for the rest of the 23-17 loss, with Fajardo going 9 for 17 (52.9 per cent) for 66 yards.

The Riders offence exploded in a Week 2 tilt versus the Redblacks, with Fajardo completing 27 of 34 passes (79.4 per cent) of his passes for 360 yards and two touchdowns and another 10 yards and a major on the ground. Then the 27-year old pivot put up another three-touchdown game on Canada Day against the Argos, going 24 of 31 (77.4 per cent) for 430 yards.

The jury is still out on whether Fajardo can sustain this level of play throughout the season, but right now he’s been exactly what the doctor ordered for Saskatchewan.

The Stamps stormed back to beat the Lions in a wild finish on Saturday, but there were bigger concerns for Calgary than the Week 2 game after franchise quarterback Bo Levi Mitchell left the game in the fourth quarter with what he described as a pectoral injury. Mitchell is scheduled for an MRI this week. Update: following an MRI no timeframe has been given for Mitchell's return.

Following MRI results, no decision yet on a time frame for Bo Levi Mitchell. #Stampeders are seeking a second opinion on the results. @CFLonTSN @TSN_Sports @SportsCentre

Nick Arbuckle led an impressive fourth-quarter comeback for Calgary this past weekend after Mitchell went down, but if Mitchell misses a significant amount of time the Stampeders could be in serious trouble.

3. Is this just a tough start for the Lions?

The expectations were high in B.C. this off-season after signing star quarterback Mike Reilly. Now, three weeks into the season, the Lions are 0-3 after blowing an 11-point lead to Calgary’s backup quarterback with less than three minutes remaining in the game.

B.C. has allowed 33 or more points in all of their games so far and Reilly has been sacked a league-high 10 times. This team is still loaded with talent and stacking a few wins would go a long way to helping this group gain some traction in the West Division. With Reilly behind centre and a Week 4 matchup against the winless Argos on tap, B.C. can still turn this tough start into a successful season.

4. What is the identity of the Bombers offence?

In the first game against B.C., Blue Bombers running back Andrew Harris ran for 148 yards on just 16 rushes and Darvin Adams and Drew Wolitarsky combined for more than 110 yards and three receiving touchdowns.

In Winnipeg’s second game versus the Eskimos, Harris had a pair of fumbles and neither Adams nor Wolitarsky recorded a catch. The Bombers did get a breakout performance from former Dallas Cowboy Lucky Whitehead, who had 155 receiving yards and two scores.

Getting offensive production from all over the roster isn’t necessarily a bad thing, but Winnipeg’s late-game offence isn’t sustainable. The Bombers were firmly in control against the Esks, leading by 16 points in the fourth quarter. Matt Nichols and the offence were only able to pick up one first down in the final frame, which gave Edmonton ample opportunities to tie the game.

Winnipeg hasn’t had any problems putting points on the board, but when they need a late-game first down it’s still unclear who they can rely on.

5. What is wrong with the Argos?

The Argonauts have been outscored by 75 points in eight quarters of football, with major issues on both sides of the ball.

On offence, the Argos are averaging a league-low 296.5 yards per game and 9.5 points per game. Starting quarterback James Franklin has been pulled in the second half of both games and has just one passing touchdown to three interceptions. Feature back James Wilder Jr. has only 16 carries for 72 yards on the season. Two-time CFL All-Star slotback S.J. Green has just eight catches for 88 yards.

It doesn’t get any better on defence, where Toronto has surrendered 96 points in two games. Shawn Lemon and the defensive front haven’t recorded a sack yet. The only interception the defence has forced was fumbled away on the same play. There’s no simple answer to the Argos troubles, but if they don’t figure it out quickly they’re in danger of having another forgettable season.