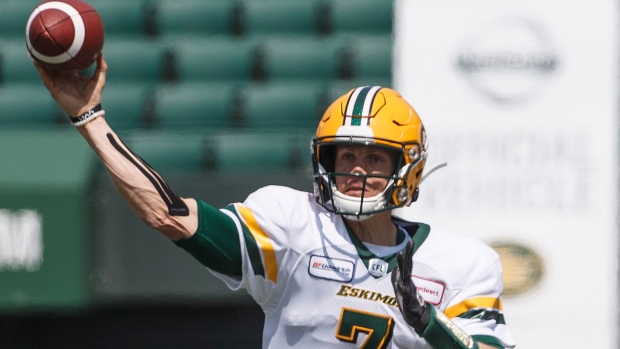 The first Friday Night Football game of the 2019 CFL season is tonight in Edmonton with the Eskimos hosting the Montreal Alouettes.

Both teams missed the playoffs in 2018 and made major off-season changes. Here are five of the biggest questions heading into 2019 for the Eskimos and Alouettes:

1. How long will it take for Trevor Harris to get this offence going?

The Eskimos are a veteran-heavy team but have a lot of new faces. Only nine of 24 players that started the final game of 2018 for Edmonton are still on the roster for the season opener.

The biggest change is at quarterback, with 33-year-old Trevor Harris now lining up under centre after an off-season move from Ottawa.

The Eskimos offence will likely rely on running back C.J. Gable early in the season while everyone else gets on the same page. That shouldn’t be an issue for the veteran back who had a career-high 1,063 yards on the ground and 212 more through the air in 16 games last year.

It may take a while longer for Harris to be on his game. He’ll be trying to find his rhythm with veteran receivers Kenny Stafford, DaVaris Daniels and Natey Adjei. He’ll also have to help Tevaun Smith, who spent the last three seasons in the NFL, and rookie Shai Ross get acclimatized to the CFL.

The West Division is very strong this season, if Harris and the offence sputter for too long out of the gate it could be costly for the Eskimos.

2. Can Khari Jones bring stability to the Alouettes?

It’s no secret that the Alouettes have lacked an identity since Marc Trestman and Anthony Calvillo left town. Montreal has employed eight different head coaches since 2013, and none of them lasted longer than two seasons.

The team announced last week that it was parting ways with head coach Mike Sherman, just six days before the season opener in Edmonton. Jones, the offensive coordinator, was tasked with stepping in as interim head coach.

It has been reported that a big reason the Alouettes cut ties with Sherman was the former coach’s lack of knowledge of the Canadian game. That isn’t an issue for Jones, who has more than 20 years of CFL experience as a player and coach.

It’s never ideal to have an interim head coach have to step up with so little preparation time, but if Jones can provide stability for his young quarterback Antonio Pipkin the team could exceed expectations in 2019.

3. Will Anthony Orange be the same player following injury?

Orange had his best season as a CFLer with the Lions last season. The veteran defensive back had a career high in tackles (54) and interceptions (five), including a 54-yard house call. Orange was named a West All-Star and CFL All-Star last season, both firsts in his career.

The 6-foot, 190-pound defensive back tore a shoulder labrum and underwent surgery in November. At 31, it’s fair to wonder if Orange can follow up his breakout campaign with another standout season.

Orange made his training camp debut last week and will start tonight against Montreal.

4. Can Antonio Pipkin take the next step for Montreal?

Pipkin’s path to being the starting quarterback in Montreal hasn’t been easy. Coming out of NCAA Division ll Tiffin University, Pipkin signed with the Als in 2017 and only appeared in one game.

Pipkin played in 12 games last season, taking over as starter for four after Johnny Manziel suffered a concussion. Pipkin was removed from the starting spot following a four-interception game. He finished the season completing 59.5 per cent of his passes for 1,120 yards, three touchdowns and eight picks.

Pipkin’s teammates say they’ve noticed growth in him this year as both a passer and as a leader.

“Every player has that one year where he goes from a young guy to a real pro… I see him taking those steps,” Montreal receiver DeVier Posey told Emilie Desgagnes of montrealalouettes.com

For Pipkin to have a good year, Posey and Montreal’s up-and-coming receiver group will have to step up in a big way.

5. Will this Eskimo team figure it out off the Field?

Edmonton missed the playoffs for the first time in five seasons last year, and it wasn’t because of a lack of talent. They led the league in passing and Gable went for more than 1,000 yards on the ground – the first time in seven seasons an Esks back has passed that mark.

The issue in Edmonton last season was behind closed doors, according to veteran kicker Sean Whyte.

“I think the cancer that was in the locker room is gone… no jerks are going to be on this team. It doesn’t matter how good you are, if you don’t fit in with this crew, you’re not going to be here.” Whyte told the Edmonton Sun this week.

Whyte was on the last Eskimos team to hoist a Grey Cup in 2015, so it’s fair to say he knows what has to happen behind the scenes to win it all. A lot of things will have to go right for Edmonton to get the Grey Cup, but it all starts with getting things right in the room.