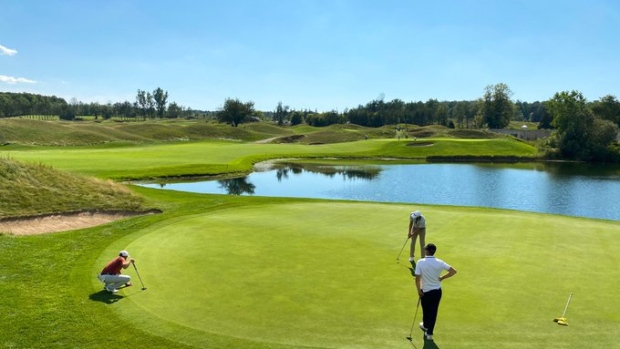 CALEDON, Ontario —It’s a logjam atop the leaderboard, with five players shooting rounds of 66 on the opening day of the Osprey Valley Open at TPC Toronto at Osprey Valley’s Heathlands Course.

Whitby’s Matt Shubley was the first player into the clubhouse at 5-under, with four players following him.

“My game’s definitely in a pretty good spot right now,” said Shubley, who made six birdies on Thursday, including five in a seven-hole stretch. “I would say my iron play is where it needs to be. I could probably tighten up a few other things, but I feel pretty good right now.”

Troy Bulmer of Vernon, British Columbia, also recorded a round of 5-under. His came courtesy of a 32 on the front nine. He credited his play off the tee for his early success.

“I drove the ball well today,” said Bulmer. “If you can put the ball in the fairway consistently out here, usually you can start making some birdies because you’re controlling your spin coming into the greens. And where they were tucking a lot of the pins today, you needed to be able to do that.”

It was also a solid start for Noah Steele. The amateur from Kingston, Ontario, played a bogey-free round and is also tied for the lead heading into Friday.

“Any time you can play in a professional event at any level it’s just the experience and a feather in your cap,” said the member of Golf Canada’s amateur team. “That’s the purpose and the focus but it’s nice to come out and get off to a good start.”

Joining the trio in the tie for first place are a couple of golfers from British Columbia – Cole Wilson of Kelowna and Vancouver’s Evan Holmes. Alone in sixth, a stroke back is Blair Bursey.