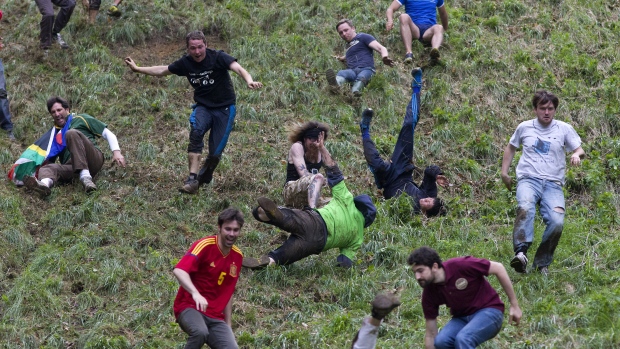 The Coors Light Summer Games has reminded us how much fun this time of year can be. With the finest of competitors getting set for Nationals in events like Cornhole, Last Canoe Standing, Poll Keg Jam and Volley Pong, we thought it was only fitting to take a look at some of the stranger games people play.

Here are five wacky sports you need to see.

Here, throw this fish as far as you can. No problem, right? Well, not so fast.

Tuna tossin’ is a tough act, combining equal parts strength and technique to try and outdistance the competition with a hefty fish.

There are many ways to accomplish the goal. Some people opt for the windmill spinning motion, hoping for momentum to do all the work while others go for the simple pendulum swing, relying on the strength in their arms. What appears to work best is the hammer-throw style, building up the speed and momentum with a full body spin before releasing the tuna.

What better way to prove your ability and honour your family then by climbing an enormous tower covered in buns?

At the Cheung Chau Bun Festival on the island of Cheung Chau in Hong Kong, competitors and audiences flock to the most famous part of the celebration, the bun climb.

The goal is to collect as many buns as possible, however the higher the bun, the greater it’s fortune for one and their family. The event falls in line with Buddha’s birthday.

The competition is only for the quickest and most nimble of people and fighting for family honour might be the greatest prize of all.

Cheese rolling may sound lighthearted, but it is one of the most vicious athletic competitions you can partake in — a running of the bulls for cheese.
A wheel of cheese is rolled down a very steep hill and ferocious competitors race down the hill in an attempt to catch the runaway cheese. Simple.

The biggest and baddest of cheese rolling is the Cooper’s Hill Cheese-Rolling and Wake, an annual event held in Gloucester near England.

Originally, a nine-pound wheel of cheese was used in the competition, however, travelling at speeds over 100 km/h, it was deemed unsafe and a styrofoam replacement is now used.

If you have an outhouse lying around and you’re wondering what to do with it, well, we have a sport for you.

You will need to attach a sturdy base with a couple of handles to it, as well as two wheels, but after that you’re ready for the world of outhouse racing.

Yes, outhouse racing is a real sport and it involves speed, endurance, dexterity, a strong stomach and a good sense of humour.

Outhouse racing is an obstacle course of sorts, where teams will run their outhouses down a track before having to complete a few challenges and then run the outhouse back.

As you probably guessed, the whole thing is very potty themed!

Brought to you by the amazing and creative people in Finland comes wife carrying, a sport where husbands carry their wives through a course of obstacles as fast as they can.

There are three main techniques to wife carrying: the back pack, the fireman’s carry and Estonian-style (a favourite), where the female is upside down on the male’s back with her legs on his shoulders and her arms around his waist.

Oh, and the prize at worlds is the wife’s weight in beer.