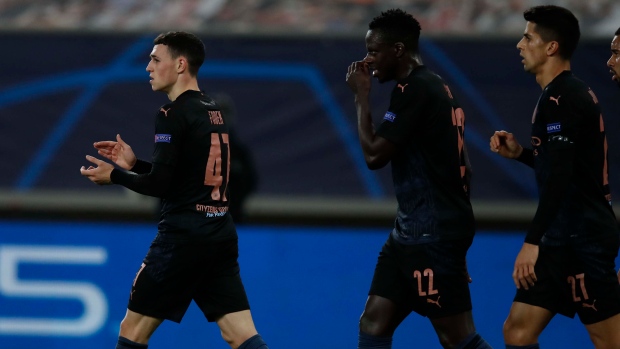 PIRAEUS, Greece — Phil Foden sent Pep Guardiola another reminder of his scoring ability by earning Manchester City a 1-0 win at Olympiakos on Wednesday, clinching the English team a place in the knockout stage of the Champions League for an eighth straight season.

The highly rated 20-year-old forward is the rising star in City’s squad but has been unable to secure regular game time in the Premier League this season despite the team’s unfamiliar struggles in front of goal.

Guardiola gave Foden a start against the Greek champions in Piraeus and the England international responded by sweeping in the only goal of the game in the 36th minute after meeting a backheel from Raheem Sterling with a first-time shot.

In a game that resembled an attack vs. defence training drill at times, City failed to make its dominance count in terms of goals but barely allowed Olympiakos into the visitors’ penalty area, ultimately strolling to a victory that guarantees a top-two finish in Group C.

City has won all four of its games so far in what, on paper, always looked like one of the weakest groups in terms of overall quality. The team has never won Europe’s elite competition despite the vast spending of its Abu Dhabi ownership, and Guardiola hasn’t led a side to the title since the second of his triumphs with Barcelona in 2011.

“We make an incredible group stage, especially our two games away,” Guardiola said. "Twelve points, already qualified, we are going to try to finish first of course.

“I know it looks easy when it happens, but it’s not. It’s because of the quality of the players they are.”

Olympiakos, which was missing six regular starters because of the coronavirus or injuries, is in third place on three points. It is six behind Porto after the Portuguese team's 2-0 win at Marseille later Wednesday.

“We had so many players out and it was obvious tonight," Olympiakos coach Pedro Martins said. "City made things very tough for us. It’s unfair for me to point out that we had few chances because we did the absolute best with what we had.”

Foden moved onto four goals for City in all competitions this season, and was the team’s brightest player in an empty stadium. However, he has only played a total of 72 minutes in City’s last four Premier League games, starting on the bench for each of them.

Guardiola’s team has been unable to find its attacking spark, scoring just 10 goals in eight league games, and again lacked a cutting edge against Olympiakos. Being without the rested Kevin De Bruyne probably didn’t help.

Guardiola was happier with how City attacked compared to recent games.

“Unfortunately we could only score one goal but the team is alive,” Guardiola said. “Today we were much more incredible, much more aggressive. It’s not easy (against a defence) with nine players but our pressing was so good.”

Bernardo Silva squandered the best of the rest of the chances, flicking the ball straight at goalkeeper José Sá from close range in the second half. Sá also twice denied Sterling before the break.

Sergio Aguero came on as a 78th-minute substitute for City for his first appearance since Oct. 24 after recovering from a hamstring injury.

A minute's silence was held before kickoff in honour of Diego Maradona, the Argentine soccer great who died Wednesday at the age of 60.