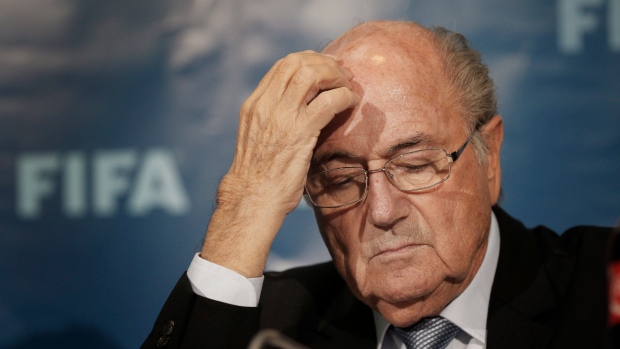 GENEVA — Former FIFA president Sepp Blatter says the arrest of soccer great Michel Platini as part of a French corruption probe lends weight to his version of how the United States lost the 2022 World Cup vote to Qatar.

Blatter told The Associated Press on Tuesday that he has insisted for years that the result of the 2010 vote was swayed by a meeting in Paris two weeks earlier involving then-French President Nicolas Sarkozy, Platini and Qatar's future Emir.

Blatter spoke hours after Platini, the former France midfielder who was the UEFA president at the time of the vote, was detained in Paris on Tuesday by French authorities who also questioned two former Sarkozy aides.

"It's all detailed — what I always said," Blatter told the AP in a telephone interview from Zurich, citing the twobooks he has published since being banned by FIFA.

Qatar beat the long-favoured U.S. 14-8 in a final round of voting by a since-discredited FIFA executive committee. Most of the voters have since been banned by FIFA — including Blatter and Platini — indicted by the U.S. Department of Justice, or implicated elsewhere in financial wrongdoing.

Two weeks ahead of the vote in Zurich, Platini had been hosted by Sarkozy at the French presidential residence, and met senior Qatari officials including then-crown prince Sheikh Tamim.

According to Blatter, that Élysée Palace lunch changed the course of FIFA's plan to award the 2018 World Cup to Russia and the 2022 edition to the U.S. on the same day.

"Platini phoned me and said, 'Listen, president, our gentlemen's agreement which we have made inside the FIFA executive committee will have difficulties to work,'" Blatter said Tuesday.

In Blatter's version, Platini — who in 2015 acknowledged switching sides — and three other voters from European soccer body UEFA changed their planned American support.

"It was four votes which have disappeared," he said. "If you change the four votes then the winner will be the USA."

Platini has long insisted that the meeting did not influence his vote for Qatar less than two weeks later.

"Sarkozy never asked me to vote for Qatar, but I knew what would be good," he told the AP in 2015. But, in the same interview, he also said that he "might have told" American officials earlier that he was going to vote for the United States' bid.

On Tuesday, Platini's representatives denied any wrongdoing on his part, saying he is "absolutely confident in the future" and has "strictly nothing to reproach himself for."

The 83-year-old Blatter, who is serving a six-year ban by the FIFA ethics committee, was interviewed as a potential witness by French investigators in Zurich in April 2017.

On a day of intrigue for Blatter, the attorney general for Switzerland was recused from overseeing a sweeping criminal investigation of FIFA officials.

The Swiss, French and American cases have shared information and evidence over the past five years, since the Blatter-led FIFA filed a complaint in 2014 about suspected money laundering in the 2018 and 2022 World Cup bidding contests.

The federal court says it upheld requests by two claimants it did not identify.

"Now I get part of my trust and confidence in the Swiss justice back," said Blatter, who has been a criminal suspect since September 2015 but never charged.

He denies wrongdoing in a case which ended his 18-year FIFA presidency, and asked Tuesday: "Why the hell is not all over yet?"

Criminal proceedings against Blatter are among at least 25 opened by Lauber's federal prosecution team in the wider soccer probe.

Lauber's job has been at risk since two 2016 meetings with Infantino were revealed last November in the Football Leaks series publishing confidential emails and documents from the soccer industry.

A disciplinary case was opened against Lauber last month when an undeclared third meeting with Infantino in Bern in June 2017 was revealed.

"This is an old story," Blatter said of the investigations against him, adding he is recovering from knee replacement surgery four weeks ago. "I do hope that the Lord will give me enough time to live and to have a look at the end of this story."